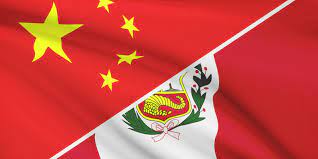 Peruvian President Pedro Castillo released a video, broadcast by most television stations, greeting China and its people for the anniversary.

The president highlighted the fact that the Asian country “is our first commercial partner, significant investor and cooperator, with which the level of Comprehensive Strategic Association has been reached.”

He agreed with Chinese Ambassador, Liang Yu, in highlighting the character of a comprehensive strategic partnership assigned by both parties to their diplomatic and commercial relations, reestablished on November 2, 1971.

According to the diplomat, Peru was one of the first countries in Latin America to establish diplomatic relations with his country and expressed his satisfaction with the development of this relationship to the current high level.

The ambassador reported, in an interview featured in the official newspaper El Peruano, that both countries are negotiating the optimization of the bilateral trade agreement, which “I think will lay a more solid foundation for the future of trade and investment cooperation.”

The bilateral trade balance, he added, has always been favorable to Peru and the volume of trade grew 1,200 times in the 50 years since its inception.

“Despite the unfavorable international context, trade between China and Peru increased, against all odds, reaching a total of 23,000 million dollars in 2019, which represented 25 percent of Peru’s total foreign trade,” commented the Embassy China on its website.

Foreign Minister Oscar Maúrtua inaugurated the online forum “50 years of the establishment of diplomatic relations between Peru and China”, with the participation of the Embassy of the People’s Republic of China, the Peruvian Postal Services company, academic entities and business associations, among others.

Maúrtua described the level of bilateral relations between Peru and China as excellent and recalled that these rose in 2013, under the nationalist government of Ollanta Humala, to the level of Comprehensive Strategic Association.