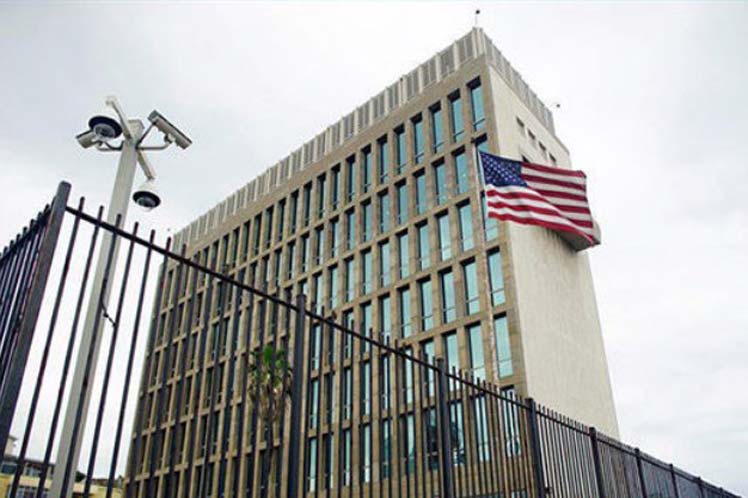 The publication quoted U.S. academic William LeoGrande, who reported that the diplomatic headquarters “has taken a leading role in supporting dissident activists, pushing the limits of what is normally allowed under the Vienna Convention on Diplomatic Relations”.

LeoGrande warned that “the United States and Cuba are on a collision course over U.S. diplomats’ support for “democracy promotion” programs.

In Back Channel to Cuba, LeoGrande and Peter Kornbluh stated that, under George W. Bush, funding for democracy promotion in Cuba not only skyrocketed, but it was the U.S. Interests Section in Havana that “spearheaded this wide support for opposition to the regime.”

A report by Ted Snider, a senior analyst of U.S. foreign policy and history, indicated that President Joe Biden is “ushering in a new era of relentless diplomacy” as part of the aggression against Latin America, considered by Washington as its backyard.

As part of this aggressive policy, the analyst pointed out, the Secretary of State, Antony Blinken, said his country is working with its usual cast of “like-minded allies”, such as the Organization of American States, to put pressure on Venezuela.

In the Cuban case, the White House is maintaining and intensifying Donald Trump’s hard line by voting against the UN resolution to end the blockade of the island, and refusing to lift restrictions on remittances that make it impossible for Cuban Americans to send money to their families, Snider pointed out.

The press report pointed out that the U.S. Agency for International Development (USAID) granted six million 669 thousand dollars in subsidies for projects aimed at “regime change” in Cuba.