Support for Cuba grows in Germany before US destabilizing action 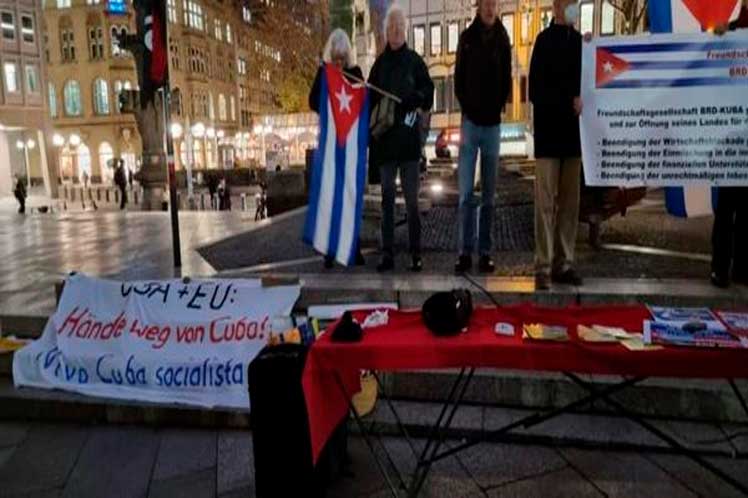 Support for Cuba grows in Germany before US destabilizing action

He highlighted this Tuesday that since last November 15, actions in support of the Cuban Revolution have also been carried out in the cities of Hamburg and Cologne, in which militants from various organizations take part, including the Democratic Socialist Left and the Germany-Cuba Friendship Association.

Members of the Socialist Federation of German Students, the Die Linke party, the German Socialist Workers’ Youth, the ‘Cuba Sí’ Regional Group and the Latin Voice organization also joined in this campaign, which carried out various activities in solidarity with the nation.

In Berlin, protesters carried posters and distributed flyers in which they expressed their rejection to external interference against Cuba, as well as their repudiation to the economic, commercial and financial blockade of the United States against the Island.

The Ida-Ehre-Platz square, in Hamburg, was the scene for a public demonstration in which several speakers denounced the subversive maneuvers directed and financed by the US Government, and also highlighted Cuba’s progress in health, education and culture.

Several groups of friendship with Cuba organized an evening event in the city of Cologne in support of the Revolution and the Cuban people, where participants also expressed their rejection of the destabilization plans and received information about current situation, with the return to the new normal.

It was emphasized that thanks to the advances in the control of the Covid-19 pandemic, since this Monday the reopening to international tourism began as well as face-to-face classes in Cuban schools, with children and teenagers already vaccinated.