António Guterres highlights example of The Peace Agreement in Colombi 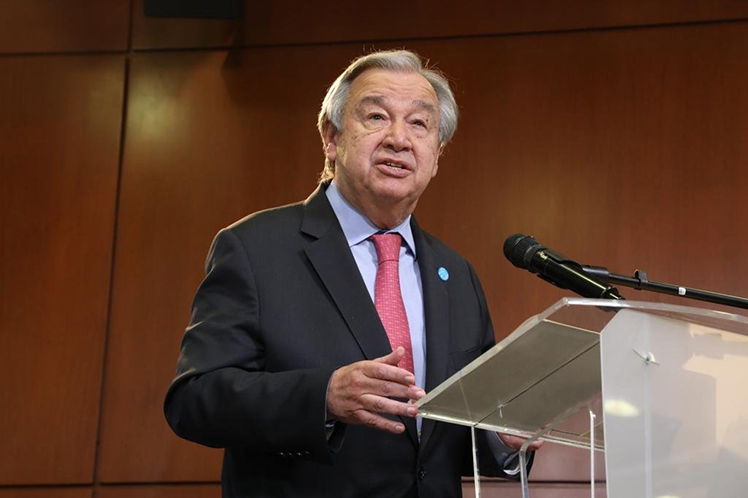 António Guterres highlights example of The Peace Agreement in Colombi

“In a world of geopolitical divisions, endless wars and multiplying conflicts, Colombia sends a clear message: It is time to invest in peace,” said the Portuguese diplomat.

During his address at the solemn ceremony for the commemoration of the fifth anniversary of the Peace Agreement, the official affirmed this process generated hope and inspiration in Colombia and throughout the international community.

“A peace agreement negotiated to end a conflict that many believed to be unsolvable is unique and extremely valuable,” Gutérres stressed.

He highlighted this fifth anniversary is an opportunity to celebrate the achievements of its implementation, recognize the challenges it faces and renew the collective commitment to make its promise to build a stable and lasting peace a reality.

“The Final Peace Agreement not only sought to silence the weapons, it also established a roadmap aimed at transforming the root causes of the conflict and begin to heal the wounds so that atrocities committed everywhere do not happen again,” he stressed.

He added this pact, in which women have played an unprecedented role, contains key innovations for building peace.

In this regard, he highlighted the inclusion of wide-ranging gender provisions, which recognize the impact of the armed conflict on women and their fundamental role in building peace; as well as the differentiated approach for indigenous and Afro-Colombian communities.

Guterres recognized the transitional justice process where he has seen historic war crimes indictments and unprecedented acknowledgments of responsibility.

He called on the risks to peace, such as violence by armed groups in connection with drug trafficking. “Every death in itself is a tragedy. Every death sends a devastating message to these communities,” affected by the violence, he noted.

For the Secretary General of the UN, the Special Jurisdiction for Peace, the Truth Commission and the Unit for the Search for Disappeared Persons deserve admiration and solidarity because the three entities are indispensable for there to be justice, truth, reparation and non-repetition.

“Challenges are part of peace processes, to overcome them it is necessary to work with a common purpose. There are issues on which one can disagree in democracy, but peace should not be one of them,” concluded Guterres.

At the same time, the official reaffirmed the UN’s support for the Agreement signed in 2016 between the Revolutionary Armed Forces of Colombia and the government of Juan Manuel Santos on behalf of the State.