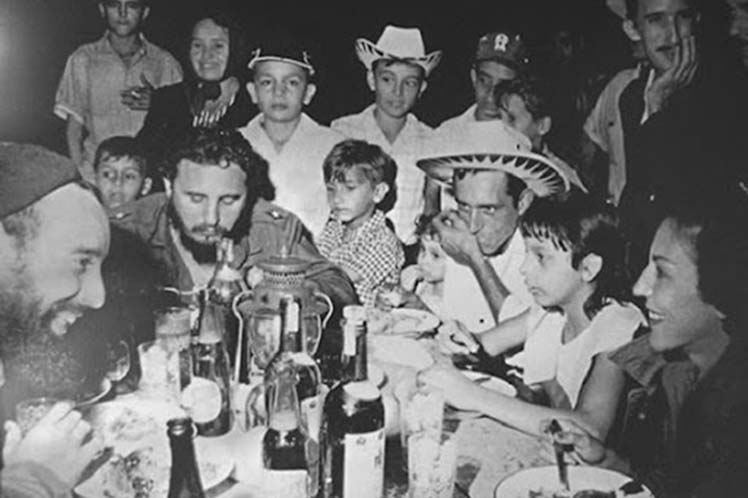 Cienaga de Zapata, Cuba, Dec 24 (Prensa Latina) On December 24, 1959, there was intense activity in Soplillar, an area named after the abundance of the soplillo tree in this wetland, south of the western Cuban province of Matanzas.

Near the main nucleus of the community, there were two humble huts where the families of Pilar and Rogelio, and Francisca and Carlos lived, who also had finished cooking the food for what would be a historic Christmas Eve.

“Suddenly we felt a noise and we saw, at a distance, like a star coming down from the sky. Later we found out that it was a helicopter, but we didn’t know anything at first,” Haydee García, who at the time was nine years old.

Haydee, daughter of Pilar and Rogelio, and the fourth of seven siblings, recalled years ago that Antonio Nuñez Jiménez arrived first, who asked if Fidel could have dinner with the charcoal burners and their relatives, “and of course our parents and neighbors said yes”.

“Fidel arrived after a while, I estimate it would be eight o’clock at night, and we all ran to greet him, hug him,” said our interlocutor, who kept clear memories of him.

“He asked the children if we went to school and he told us to show them the notebooks. We, saddened, lowered our heads and told him that sometimes we did not go to class because we did not have any shoes,” recalled the wetland neighbor.

“Fidel,” she added, “listened to us attentively and said to my mother: you are going to see that from now on the children will have shoes, they will go to school and here buses will enter and leave. We will build roads”.

“It must be remembered that before the Revolution, pregnant women and the sick died, because there was no way to get them to a hospital or a medical center, due to the lack of communication routes in this inhospitable region,” said Haydee.

A half century after that memorable day, the painter Kcho enabled, in the place of the transcendental meeting, the opening of a Memorial Library “50th Anniversary of the Carbonera Dinner with Fidel”.

It is made up of two shacks each with two rooms, little furniture, the essentials for cooking and washing, with dirt floors, walls made of palm boards and a roof made of guano leaves; the imitation of a coal furnace, and the library.

“I grew up and the Revolution gave me the opportunity to study, I worked in commerce and health, always with Fidel present in my heart, he gave us everything to the cenagueros,” Haydee commented at the time of that inauguration.