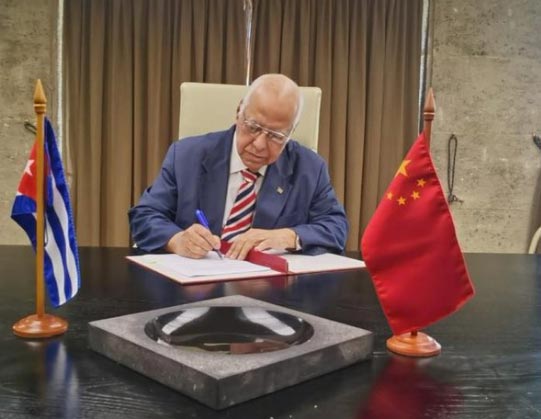 The spokesman for the Ministry of Foreign Affairs of China, Zhao Lijian, commented that such action will further the efforts of both parties to implement the consensus reached by the heads of state of the two nations.

Both countries signed in November 2018 a memorandum of understanding on the participation of Cuba in the initiative, aimed at building an international mega-platform for exchanges with shared profits.

Zhao said that they now have the mechanism to implement it thanks to the signing of the cooperation program last Friday by Cuba’s Deputy Prime Minister, Ricardo Cabrisas, and the president of the National Development and Reform Commission of China, He Lifeng.

Cuban representatives specified that the plan constitutes one of the main milestones in economic relations between China and Cuba in 2021 and defines, among other aspects, the objectives, principles and fields of cooperation such as policy coordination, connection of infrastructures, free trade, financial integration and people-to-people links.

They mentioned the agreement of a first list of prioritized projects and actions linked to the development of sectors such as renewable energy, free trade and infrastructure, tourism, finance, telecommunications, science and technology, food and biomedicine.