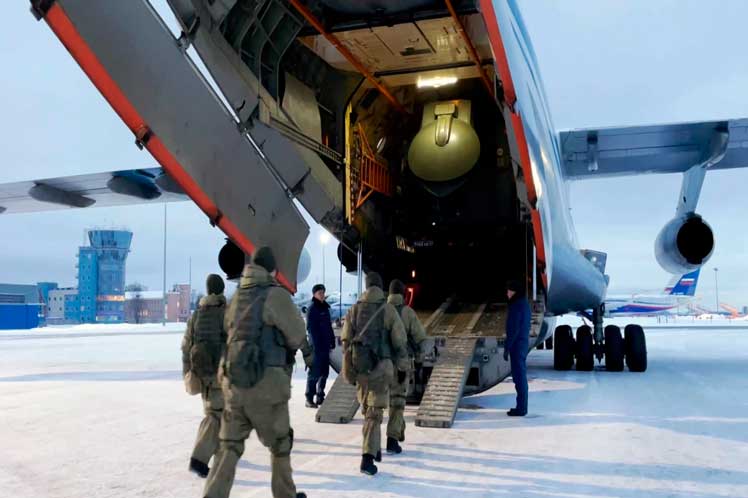 “No further decisions by Parliament on the use of the Army are needed in the framework of the CSTO peacekeeping operation in Kazakhstan, as the treaty and the organization’s charter were at the time ratified by Moscow,” the parliamentarian wrote on Facebook.

He clarified that the task of the bloc, made up of Armenia, Belarus, Kyrgyzstan, Russia and Tajikistan, will be the protection of state and military facilities and assistance to the forces of order, which must be in charge of restoring normality in Kazakhstan.

“Our mission is to help them preserve the country by guaranteeing its security, stability, territorial integrity and sovereignty, as established in the Collective Security Treaty,” Kosachev explained.

He stressed that the support of the CSTO is legitimate both from the point of view of the internal legislation of the member countries of the organization and of international law. “Although one can imagine how it will be evaluated by those external forces that would like to see a different power in Kazakhstan,” he said, and considered that the CSTO peacekeeping operation could have been avoided if the social protests had not reached the stage of extremism and of violation of the law.

Kosachev drew attention to the fact that the manifestations of rejection of the increase in the prices of liquefied gas were accompanied by the response on the part of the authorities to freeze prices and remove the Government, which, however, had no effect.

For the vice president of the Russian Senate, the latest extremist actions such as the taking of official buildings, the destruction of public institutions, the use of weapons, vandalism and looting show that the events did not occur spontaneously.

“Ultimately it is not about gas, but about power, which will be overthrown by all available methods, the main of which is terror,” he said.

US officials misinform on alleged Russian invasion to Ukraine

US officials misinform on alleged Russian invasion to Ukraine