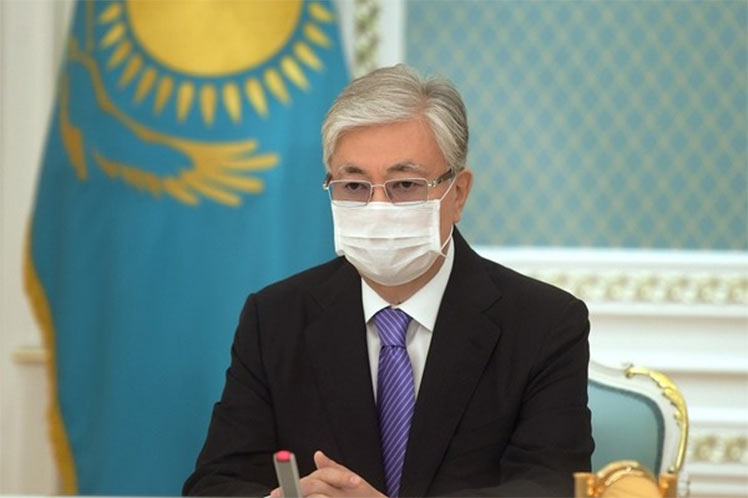 Nursultan, Jan 7 (Prensa Latina) The president of Kazakhstan, Kasim-Zhomart Tokayev, said today that behind the recent riots in the country one can see the hand of professionals of ideological subversion, skilled in the handling of disinformation and fake news.

In a speech broadcast on the Khabar 24 television channel, the President said that “preparations for terrorist attacks by underground sleeping cells went unspotted by the state”.

According to the Head of State, the National Security Committee and the General Prosecutor’s Office are already investigating the existence of a command post which was preparing and guiding in the actions all those involved in the events which caused deaths, numerous wounded and considerable material damage.

He indicated that around 20 thousand extremists were involved in the violent disturbances that took place in recent days in the city of Almaty, the former capital of the country.

Tokayev informed that an interdepartmental group was created to find and apprehend criminals and terrorists. “I promise the public that all these people will be subjected to the most rigorous criminal sanctions,” he emphasized.

The situation in Kazakhstan destabilized on January 2 with the outbreak of protests over rising liquefied petroleum gas prices in the southwest of the country.

A government commission decided two days later to lower fuel prices, but protests continued and spread to other areas, especially in Almaty, the country’s largest city.

On January 5, the president accepted the resignation of the full government and took over as head of the National Security Council, headed until then by former president Nursultan Nazarbayev.

According to official reports cited by the Sputnik news agency, 18 security officers were killed and 748 were injured in the unrest.

The Interior Ministry reported that 26 armed individuals were killed, 18 others were wounded, while more than three thousand people were arrested in the last few days.

Due to the speed with which the demonstrations spread and the magnitude they reached in a few days, political analysts consider that the actions are not spontaneous and respond to an attempt to apply in the country the format of the so-called color revolutions, organized from abroad.

Tokayev will be sworn in as president of Kazakhstan again

Tokayev will be sworn in as president of Kazakhstan again