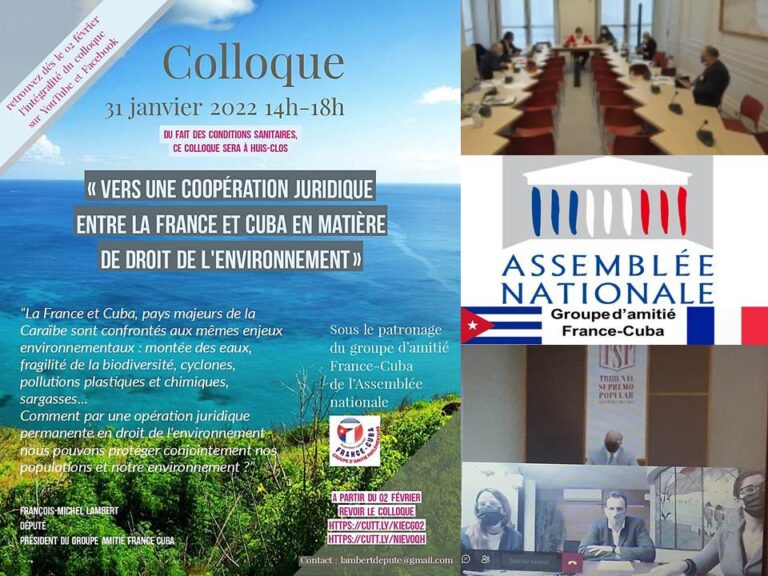 The meeting held by videoconference addressed the bilateral rapprochement on legal issues to guarantee the protection of nature and the contribution of both countries to the discussion of these issues in the Caribbean, where they share common challenges such as hurricanes, pollution and confrontation with climate change. climate.

From interventions by specialists, the participants learned details about the legal functioning in the two nations and in particular their approach to environmental protection, in the event moderated by Deputy François-Michel Lambert, president of the Friendship Group, which was attended by of the Cuban ambassador in France, Otto Vaillant.

The lawyer Christian Huglo spoke on the importance of environmental law to accompany the goals of sustainable development, while the professor and researcher at the University of Bourgogne (Dijon) Frank Cézilly dealt with the latent threats in the insular Caribbean.

Cézilly described the rich regional biodiversity as exceptional and warned about dangers such as habitat destruction, pollution, species invasion and urbanization, which lead to the risk of extinction of plants and vertebrates.

In this regard, he considered essential the role of environmental diplomacy to reach agreements and promote joint work, in specific areas of the relevance of university cooperation, in which Cuba and France, a country present in the Caribbean through territories of overseas.

For their part, the representatives of the People’s Supreme Court of Cuba Pedro Medina and Liliana Hernández shared information on the profound procedural and judicial reform on the island, aimed at protecting citizen rights, including the enjoyment of a healthy and balanced environment.

Hernández, who chairs the Economic Chamber, highlighted the updating of the Criminal Code, and the commitment that it will materialize with the defense of nature, from a chapter devoted to crimes against the environment, in line with the priority that grants these issues the Constitution of the Republic.

The director of the Institute of Ecology and Systematics, Daimar Cánovas, also spoke for Cuba to point out the expectations in the country for the debates on a new Environmental Law, which must be approved in April, a regulation that will strengthen the institutional framework in the matter.

The law enhances the protection of biological diversity and in situ conservation mechanisms and includes novelties such as the red list of threatened species and the establishment of a specific regime for access to genetic resources, he stressed on behalf of the Ministry of Science, Technology and Environment.

At the colloquium, Justice Catherine Sargenti and Attorney Marie-Camille Pitton, General Secretary of the Arbitration Center of the Organization for the Harmonization of Commercial Law in the Caribbean (Ohadac), insisted on the importance of strengthening the legal base in the region and to build common lines on environmental law.

Sargenti said Cuban experts can contribute a lot to the objective of having a modern model law in the Caribbean that is adapted to its reality, that helps States and territories to face climate change.

Another interesting presentation during the videoconference was offered by Doctor in Law Dominique Hector, who shared his knowledge and experiences in relation to the evolution of law in Cuba, which he framed in the principle of social justice of his Revolution.