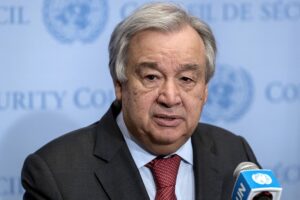 It’s time for moderation, reason and de-escalation. There is no room for actions and statements that will lead this dangerous situation to the abyss, he said during a session devoted to the crisis in Ukraine.

The senior official urged all parties to make full use of Article 33 of the UN Charter and its recommendation to use “various instruments for the peaceful settlement of disputes”.

He described the latest developments as “a cause for serious concern”, including reports of increasing ceasefire violations and “the real risk of further escalation”.

Our goal is to document civilian casualties, monitor freedom of movement and report on complaints of human rights violations, the UN chief recalled.

According to Guterres, UN humanitarian operations are independent of whoever controls the territory. Even before this latest escalation, two million Ukrainians had needed assistance, he recalled.

Since the start of 2022, UN activists have delivered 140 tons of life-saving aid across the line.

UN humanitarian assistance is guided by the four principles of humanity, neutrality, impartiality and independence, he said. “Our agencies are committed to standing up and delivering support to those most in need,” he added.

During conflicts, civilians, including women and children, are always the first victims and suffer the most, the UN chief warned, adding that if the conflict in Ukraine spreads, “the world could see a scale and a severity of needs unseen in many years.