Union march to demand sanctions against coup perpetrators in Bolivia 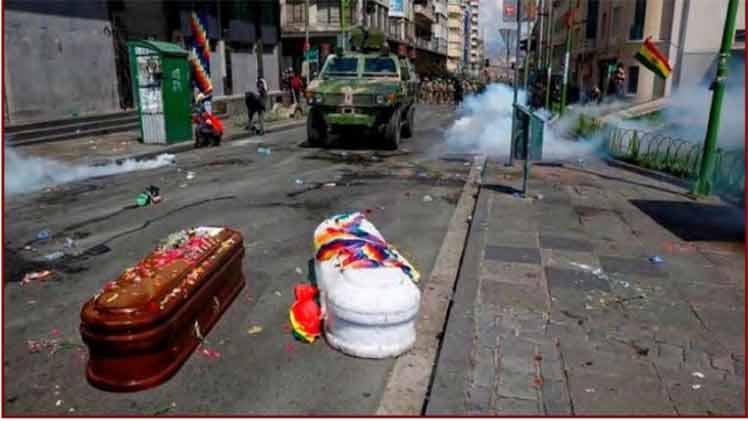 Union march to demand sanctions against coup perpetrators in Bolivia

“They have to pay for those crimes, we are not animals for them to make us kill; we have been persecuted, our comrades with false accusations have been put into prison”, Cuadros assured in statements to the Bolivia TV channel.

The union leader recalled that members of his organization have been shot and killed by politicians who so far enjoy impunity, such as Carlos Mesa, head of Comunidad Ciudadana, and Fernando Camacho, current governor of Santa Cruz.

At the conclusion of a working visit to Bolivia this Tuesday, the United Nations special rapporteur for the Independence of Judges and Lawyers, Diego García-Sayán, urged to prioritize the application of justice regarding the massacres committed by the de facto government in 2019.

The diplomat referred that he held a working meeting of more than three hours with relatives and colleagues of the victims of Sacaba, Senkata and South zone, and like the conclusive report of the Interdisciplinary Group of Independent Experts (GIEI) put the number of deaths registered between November 11 and 19 at 37.

In this regard, he regretted that “after two years, there are few results in the investigation processes”, and deplored that after these events that left dead, wounded, tortured, illegally detained and persecuted, there are no sentences.

He considered that, in this case, his visit “will contribute to encourage a priority and fair attention so that the people affected by these acts of violence can find some justice”.

Questioned by the press, the UN special rapporteur affirmed that in the interviews he held with opposition representatives and human rights activists, he did not find any evidence of alleged political persecution in Bolivia.