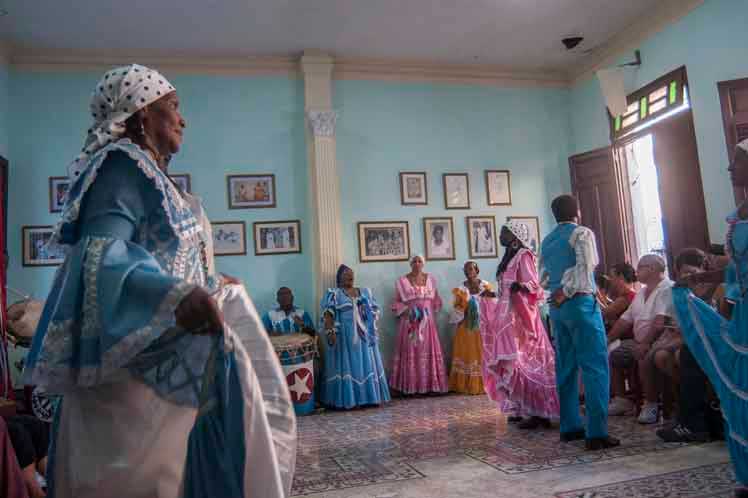 With a show tonight in the Santiago urban heart, the Carlos Manuel de Céspedes park, members of the legendary group will receive the tribute of the people of this eastern city and offer the grace of their dance evolutions, songs and touches of their ancestral instruments.

In statements to Prensa Latina, Andrea Quiala, president of the group and almost 80 years of age, and Kelly Figueroa, her daughter and vice president, at nearly 40, pointed out there are 25 members of the group with a remarkable career as drummers, singers and dancers.

They highlighted the youth that prevails among the “tumberos”(drummers) despite the elapsed century and six decades, which guarantees the continuity and preservation of authentic popular traditions from the original trunk of the Venet-Danger family.

They mentioned Flavio, the 15-year-old teenager, Kelly’s son, who is the youngest “tumbero” in a tradition that has survived the passage of time and preserves the original marks in French ballroom dances mixed with African dances and rhythms.

Andrea specified that in each artistic presentation of the group, her daughter acts as governor or majority of the plaza, who directs the evolutions in the hall, a show that at its headquarters, in the historic center of the city, attracts dozens of tourists from the most different latitudes.

“That’s the best, foreigners arrive and are ecstatic, they love what we do and they are sitting but moving their feet and dancing,” said the president of the group, who added that at the end they finish with euphoria and joy.

She lamented that this is not exactly the case with the national public, which is why greater promotion and knowledge of this bastion of Cuban and world culture, required to be declared a World Heritage Site by UNESCO since 2003.

The “Caridad de Oriente” is a living testimony of the Gallic influence in the south-east of the Island, where the Santa Catalina de Riccis and Bejuco remain active, in the city of Guantánamo and in the rural area of ​​Sagua de Tánamo, in Holguin, respectively.

Founded on February 24, 1862 as Lafayette, it received its current name from the homage it paid in 1905 to the Virgin of La Caridad del Cobre, Patron Saint of Cuba.