Importance of WFP’s shipments to Cuba highlighted in Panama 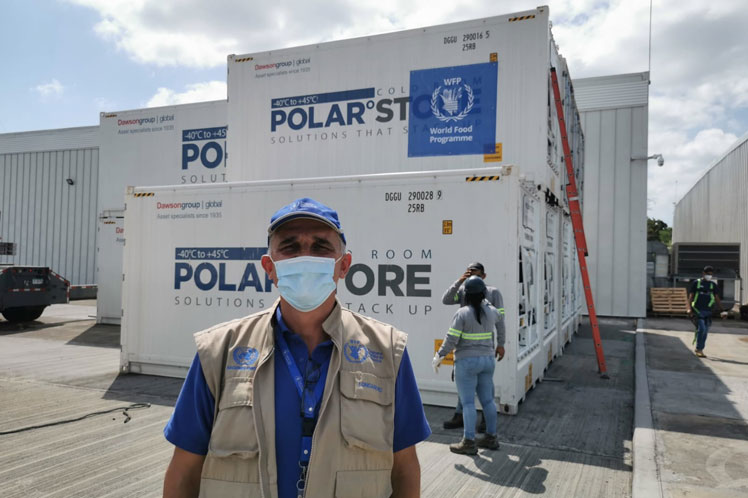 Importance of WFP’s shipments to Cuba highlighted in Panama

In an exclusive interview with Prensa Latina, the WFP Regional Supply Chain Officer for Latin America and the Caribbean, Nenad Loncarevic, explained that the recent operations are an example of collaboration with vulnerable nations in emergency situations such as the fight against the pandemic.

He explained that a joint effort with the international organization’s office in Havana and its government allowed the transfer of four refrigerated containers from Panama.

This equipment for the conservation and transportation of medical supplies is in the Special Zone of Mariel (western province of Artemisa), ready to be officially delivered this week to Empresa Comercializadora y Distribuidora de Medicamentos (Emcomed) for its installation, and new shipments are being prepared, he said.

Earlier this month, he said, we donated two refrigerated trucks that have already been delivered and are in use by Emcomed.

Among the WFP’s responsibilities, Loncarevic mentioned reacting to the needs of nations most affected by pandemics, earthquakes, hurricanes and other natural disasters or meteorological phenomena associated with climate change.

In addition to Cuba, in the region we attend to priorities in some 13 countries; for example, in the Caribbean alone, he said, we collaborate with Haiti, the Dominican Republic and Barbados.

The official has been linked to the United Nations agency for more than 20 years, which helps more than 115 million people in 84 countries annually.

During the dialogue with Prensa Latina, he explained that in 2021 along, the UN Humanitarian Response Depot executed 181 shipments from Panama to 33 countries and territories in the region on behalf of 18 humanitarian assistance institutions, mostly for the health sector.

He noted that that every day, the WFP coordinates an average of 5,600 trucks, 100 airplanes, 30 ships and a network of 650 depots to provide assistance to people living in the most insecure and inaccessible corners of the world.

A native of Montenegro, and visibly moved, the official spoke about his ties with Cuba, and mentioned his father, Jorge Loncarevic (now deceased).

I remember him as the representative of a shipping company from the former Yugoslavia (Prekookeanska Plovidba Bar), a pioneer in the country that managed to send ships to Cuba in 1962 with food and consumer products from the former USSR and, at the same time, to transport sugar from the island in the midst of the already tightened economic, commercial and financial blockade by the United States.

Graduated in English Language and Literature in 1989 at the Faculty of Foreign Languages of the University of Havana, the official recently made statements to the newspaper “Vijesti” of Podgorica, the capital of Montenegro.

He noted that in Panama he learned that the WFP had been awarded the Nobel Peace Prize in 2020 for its efforts in the fight against hunger and its contribution to improve conditions of détente in areas affected by conflicts.

The award also recognizes its contributions to countries in need in the aftermath of the Covid-19 pandemic.

Loncarevic began working for the WFP in 1999 in Bar, where the office was opened at that time due to the crisis in Kosovo and the refugees in Serbia-Montenegro.

That engagement started him as an assistant in charge of importing, receiving, loading/unloading and shipping of humanitarian aid arriving through the port of Bar for the vulnerable population. Still in the logistics department, he previously worked in missions in Kyrgyzstan, Kazakhstan, Uzbekistan, Turkmenistan and Afghanistan.

He also served in Palestine, Syria, Kuwait, Iraq, Colombia, Ecuador and Guatemala when Hurricane Stan hit the area in 2005, among others.

In 2008, he was elected Deputy Chief of Logistics in Khartoum, Sudan, for a two-year term, followed by assignments in Italy, South Sudan, Yemen, Venezuela and currently in Panama.

He says that his role is to ensure that food reaches millions of children and adults in need on time, wherever they are in the countries where the WFP has operations and whatever means of transportation is needed to achieve that goal.

He was involved in the fight against Covid-19 in Panama when he knew about his father’s death.

For Loncarevic, who starts each day very early, everything he does personally and the organization he represents is aimed at helping the neediest and most vulnerable people on the planet.

Access to food is our right and basic need, he remarked.