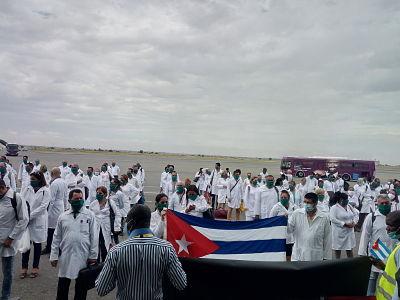 A significant number of them even work in remote communities as doctors, nurses, lab technicians, and are responsible, to a great extent, for the progress in health indicators there, the official told Prensa Latina.

Our role in Angola, he commented, is to contribute to the government’s efforts in terms of socioeconomic development and, in this sense, the discipline and hard work of Cuban women is considered a stronghold.

They work as coordinators of the mission in seven provinces, they also lead several brigades and have primacy in the university teaching given here by specialists from the island, he explained.

Together with the country’s doctors, he added, they work in primary care in neighborhoods and communes, as well as in strengthening the provincial and municipal health system.

“We have colleagues in all the provinces, in more than 130 of the 164 municipalities, which contributes to the efforts of the Angolan authorities to control and prevent the spread of the Covid-19 pandemic, saving many lives,” he said.

Likewise, university and postgraduate training is provided here by Cuban professors who, according to Santaelena, “are valuable representatives of the teaching profession in Cuba”, where investments in the social fields represent a high percentage of the state budget, approved every year by the National Assembly of People’s Power (Parliament).