Award given in Italy to Cuban Henry Reeve Contingent 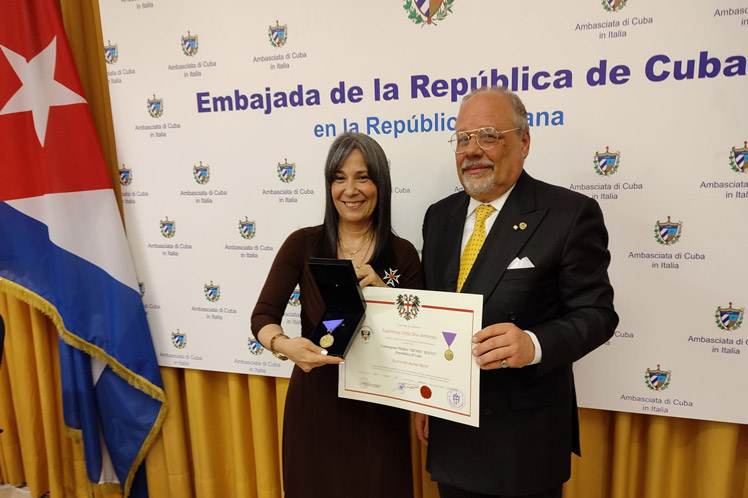 Award given in Italy to Cuban Henry Reeve Contingent

The president of the Milan-based organization, Dr. Guido Broich, presented the award to the Cuban ambassador to Italy, Mirta Granda, on behalf of the health group known for her solidarity work in different countries.

The internationalist commitment of several decades of the Brigade, bringing medical aid to people in need around the world, without political distinction or economic claims, was one of the arguments for the recognition.

The text highlighted how the Contingent had to overcome preconceived hostilities and overcome “the very serious difficulties imposed, unilaterally and in violation of international law, by the blockade imposed on Cuba, which includes essential health supplies.”

Due to the Covid-19 pandemic, he pointed out, the Brigade immediately offered its help, also to Italy, until it became a space for highly effective interventions in the province of Crema, in addition to other activities in the country.

We are here to underline and share, as much as possible, the gratitude for an action that has deeply touched our soul and the reflection on the absolute value of health, a congenital right of the human being, Broich said in his intervention.

In this sense, he quoted excerpts from the speech delivered by the historic leader of the Cuban Revolution, Fidel Castro, in Geneva on May 14, 1998 on the occasion of the 50th anniversary of the founding of the World Health Organization.

The president of the Confraternity of Saint Ambrosio also referred to the achievements of the Cuban health system, with indicators that are even higher than those of economically developed countries.

Likewise, he recognized the ambassador with the “First Class Cross of the Soldiers of Saint Ambrose”, patron saint of Milan, the city where the Confraternity was created in 2010, with the intention of deepening and living in respect and study of the tradition derived from its ancient history.

I receive the decoration for the Henry Reeve Contingent with great honor for my country and the one given to me as a challenge to continue working for what Cuba needs and the bilateral relations between Cuba and Italy deserve, she added.

The deputy head of the Ministry of Justice, Yashna Díaz, and the director of International Relations of that organization, Antonio Israel Ybarra, both here on a work visit, the vice president of the National Italy-Cuba Friendship Association, Walter Persello, and leaders of the Confraternity, were present among others.