Cuba develops several projects with the use of blockchain technology 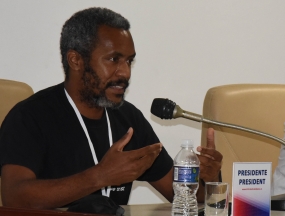 Cuba develops several projects with the use of blockchain technology

According to statements by Alexis Masó, computer engineer and main architect of the blockchain group of the Institute of Cryptography, one of them is the one that is implemented with the company Tecnomática to establish traceability of the fuel used by aviation.

Since 2019, they have been working on this purpose, and the digital tool is already beginning to be used, thanks to which physical documentation can be replaced, he said.

Likewise, he added, with the Information Technology entity belonging to the Business Group of the Biotechnological and Pharmaceutical Industries of Cuba (BioCubaFarma), work is being done on the creation of a decentralized system.

The objective of this will be the identification of drug owners and the management of information related to their possession and transfer, with the advantage that it will be able to bring together all the actors involved in said mechanism.

What we propose, he said, is to tokenize all the drugs that are marketed and produced in the country, that is, convert them through cryptography into an object that simulates another tangible one, after which each blister of specific products will be identifiable.

Other plans, as he mentioned, are based on creating a platform for the commercialization of public debt with the Central Bank of Cuba, and in a decentralized system for the registration of degrees with the Ministry of Higher Education.

They also aspire to set up a virtual wallet in conjunction with the Defense Information Technology Company and the digital payment gateway “Enzona”, and in a decentralized system for the automation of government processes.

Blockchain technology, traditionally associated with the generation of cryptocurrencies, is a publicly accessible database that uses cryptography and a decentralized system of thousands of computers to store non-breakable information, Masó said.

In the opinion of the connoisseur, its applications in the Cuban scenario are infinite because, in addition to optimizing the techniques currently used and providing them with greater security, it allows a better use of human resources.

Informática 2022 ends today in this capital after five days of work in which experts from more than 14 countries in sectors associated with artificial intelligence, robotics and cybersecurity gathered.