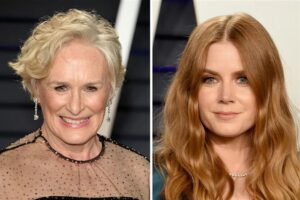 Close, who played memorable roles throughout her career, such as Alex Forrest in 1987’s Fatal Attraction and the Marquise de Merteuil in Dangerous Liaisons (1988), has a total of eight nominations from the Academy of Motion Picture Arts and Sciences.

The 75-year-old actress received her most recent nomination in 2021 for her role as Mamaw in Hillbilly, a rural elegy, but at the time almost no one expected her to win the award, given the film’s lack of success and the fact that it was not Close’s best work.

Her chances seemed much higher in 2019, when many critics and specialized publications considered that she would be the Oscar winner for her restrained and, at the same time, impressive performance in The Good Wife.

However, the renowned artist was not favored either, but the award went to Olivia Colman for her performance in The Favorite.

Playing Joan Castleman, a woman who reevaluates her life after four decades being married in the shadow of her husband, Close performed a character full of colors and complexities that revealed her inner changes with great mastery, and that work led her to sweep in other awards that season, such as in the Golden Globes.

Such a performance was not enough for the Academy, which in its history has had too many controversial decisions, and the star continued her list of disappointments in the search for the award.

In fact, she and British actor Peter O’Toole, also with eight nominations, are the actors with the most nominations, whether for leading or supporting roles, who have not won any statuettes for their performances, although the latter did receive an honorary Oscar in 2003.

Adams and Close have had a similar luck. At the age of 47 Adams has already been nominated six times, supported by her excellent work with characters, such as that of Sister James in The Doubt (2008) or that of Sydney Prosser in The Great American Swindle (2013).

The last time she came close to the award was for The Vice of Power (2018), a film in which she played Lynne Cheney, the wife of former US Vice President Dick Cheney, but finally Regina King reigned in the Best Supporting Actress category for The Beale Street Blues.

Moreover, in the case of Adams, it is considered that she also deserved recognition for her acclaimed role as linguistics expert Louise Banks in the science fiction film The Arrival (2016), but in that case she was not even nominated.

In any case, and although the above mentioned awards are usually seen as the summit in any actor’s career, both performers have already left a great legacy, and an Oscar would only come to confirm something already known by much of the public and critics.