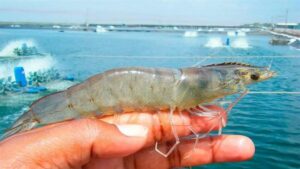 Hanoi, Mar 26 (Prensa Latina) Agricultural growers in the Vietnamese province of Tien Giang never read the tale The enchanted shrimp by French author Laboulaye, but when salt began to spoil their crops… they tried to tell the story as the French writer would have.
Share on facebook
Share on twitter
Share on whatsapp
Share on telegram
Share on email

The point is that the province is in the delta of the Mekong River, a low area in the country’s southern region where salinity increases every year due to the rise in sea levels, unluckily for people, most of whom live off rice growing.

Agricultural growers were feeling it in their pockets and, as a remedy, began to grow two salt-water resistant varieties of the above mentioned crop.

However, not even so the balance was positive, and thinking and thinking about it they did as Loppi, the character in Laboulaye’s tale: “The shrimp can get us out of trouble,” they told themselves.

A variety of shrimp -typical of salty waters- had lived in the plantation’s water irrigation canals for some time and it not only solved the situation of Tien Giang’s rice growers, but also began to fill their pockets as never before.

The breeding system is extensive: it’s enough to free the young animals as they feed themselves, grow and multiply. In the season opposite to that of the rice-harvest, the shrimp that sleeps… is taken to the market.

It’s been so good for most of them that, if the cereal was their main source of income before, the blessed shellfish replaced it. Annual income per hectare stands at some 2,600 dollars and some growers have four or five hectares.

Not everybody in the area has started developing the double business, but the sea keeps coming inland through the province’s subsoil and an increasing number of people with the water up to their heels and a plow, keep uttering a phrase that they never read, but that all of them say over and over again: “Hard shrimp, get me out of trouble.”