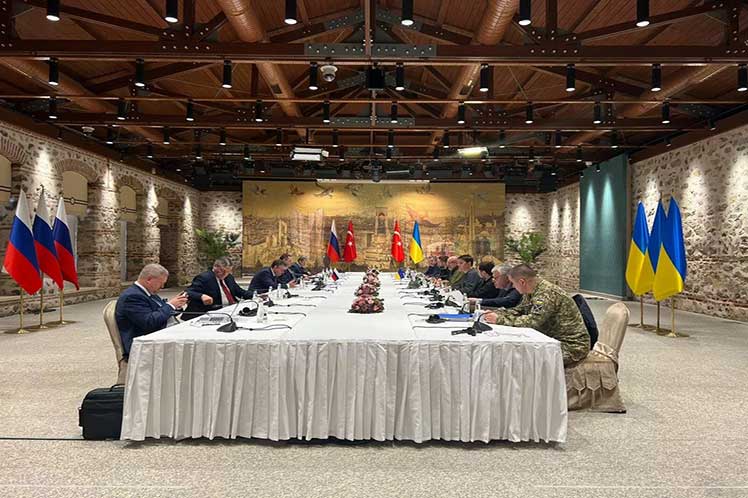 Moscow, Mar 29 (Prensa Latina) The talks between delegations from Russia and Ukraine for the end of the conflict and the bilateral confrontations on Tuesday began in Istanbul, while hostilities continue, the local press highlighted.

First day of talks between Russia and Ukraine conlcudes in Turkey

At the beginning of the meeting at the Dolmabahce Palace, Turkish President Recep Tayyip Erdogan greeted the delegations and stressed that from the very beginning, Ankara has made “sincere efforts at all levels” to find a political and diplomatic solution to the crisis.

“The talks have given hope to everyone. Prolonging the conflict benefits no one. There are no winners in war. The time has come so that the negotiations yield results. We in Turkey sincerely wish for this and we are ready to help,” the president said.

He stated that the conflict between Moscow and Kiev saddens Turkey and his Government has demonstrated “a fair approach that protects and respects the rights of both sides in all platforms where we have a say.”

Erdogan expressed hope that, if there is a breakthrough at the meeting in Istanbul, negotiations between Russia and Ukraine could reach the next stage, “the contact at the leaders’ level,” for which he said his country is also prepared, TASS news agency reported.

About this issue, in recent statements, the Kremlin spokesperson Dmitry Peskov did not rule out the possibility of a meeting between Russian President Vladimir Putin and Ukrainian counterpart Volodymyr Zelenskyy, but clarified that he must be prepared to produce results.

Parallel to Tuesday’s talks, Vladimir Medinsky and David Arajamiya, heads of the negotiation teams of Moscow and Kiev, respectively, are holding a separate round in Istanbul on “the fundamental points of the talks,” Mikhail Podoliak, a member of the Ukrainian mission, reported.