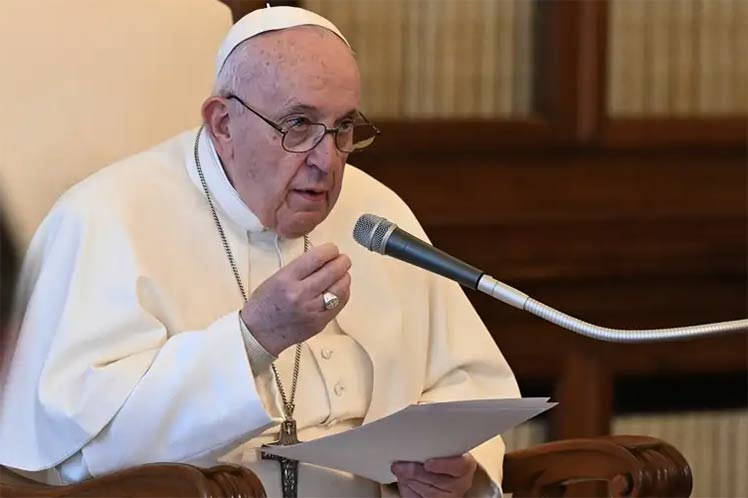 The Vatican Press Office stated in a brief statement that the meeting, held “in a climate of listening and closeness,” followed those held last Monday, the 28th, with representatives of the Métis and Inuit groups.

Today, the Holy Father will meet again with the three groups, the press release added, referring to the closing meeting of the series of colloquiums held this week.

Papal audiences are part of a process of acknowledgment and request for forgiveness for abuses committed by the Catholic Church in actions of evangelization of the original communities in the northern nation.

Among them, the forced entry of students in boarding schools run by the government and the clergy such as the Kamloops Indian Residential School, in the province of British Columbia, on whose grounds the remains of 215 of them were found in unmarked graves in May 2021.

The Supreme Pontiff referred to the “shocking discovery of the remains” in the Sunday prayer of the Angelus on June 6 of that year, expressing that the fact further increased “the awareness of the pain and suffering of the past.”

These difficult times represent a strong demand for all to move away from the colonizing model and walk together in dialogue, mutual respect and recognition of the rights and cultural values ​​of all the daughters and sons of Canada, he stressed.

On the 25th of the same month, Canadian Prime Minister Justin Trudeau apologized for the treatment given in the past to indigenous peoples after learning of the discovery of another 751 graves on the land of the Marieval Residential boarding school, in the province of Saskatchewan.

Between 1890 and 1997, around 150,000 children from Canadian native peoples were interned in dozens of school residences created by the government and administered by religious orders, mainly Catholic, where they suffered physical, psychological and sexual abuse.