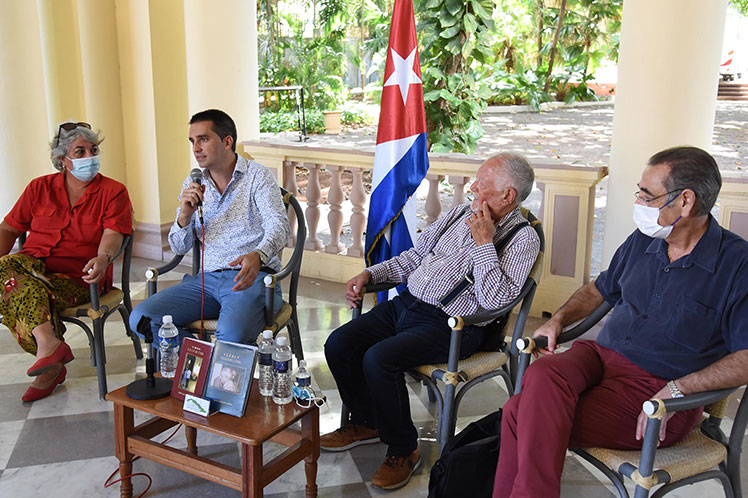 During the presentation of the volume at the Cuban Institute of Friendship with the Peoples (Icap), its author mentioned that the summarized testimonies were born without forcing them, from the first month of Leal’s death, which occurred on July 31, 2020, and before the need to defeat silence, the worst of enemies.

In this kind of “pledge of gratitude”, Cremata shared experiences, anecdotes and images on social networks that have now become a book, with a prologue by Dr. Federico Mayor Zaragoza, former director of UNESCO and a great friend of leader Fidel Castro, of Eusebio and of the island.

As he explained, it also has Words to the reader by Socorro Castellanos, a renowned communicator and diplomat from the Dominican Republic, and is divided into six chapters, each one adorned with a drawing and inspiration from his daughter Camila, then six years old.

In an exclusive interview with Prensa Latina, the institution for which he works, Cremata pointed out that the material does not follow a chronological and erudite rhythm, emanating from his own experiences with the intellectual and friend, and alluded to the carefree vision of his chronicles, arising from sincerity, affection and admiration.

“While conceiving the tribute to my mentor, I incorporated texts that appeared in the main Cuban newspapers: two interviews, two obituaries and two biographical sketches.

Following the moving request of his friend, the Ecuadorian painter Oswaldo Guayasamín, I have left a light on and the door open, because I know that from one moment to another he will return, “he said.

Funded by the Cuba Cooperation France Association, after more than two decades of close exchange with the Caribbean nation, the text is the first editorial project of the solidarity group and has two editions in French and Spanish, with more than 300 pages each. .

The founder of that group, Roger Grevoul, and its current president, Víctor Fernández, recognized Leal’s support, especially in the construction of the Victor Hugo House in this capital, and thanked Cremata for a testimonial work that will allow the international significance of the historian.

Among the participating personalities were the renowned essayist and art critic Graziella Pogolotti; the historian of the National Ballet of Cuba, Miguel Cabrera, and Fernando González, Hero of the Republic and president of ICAP.