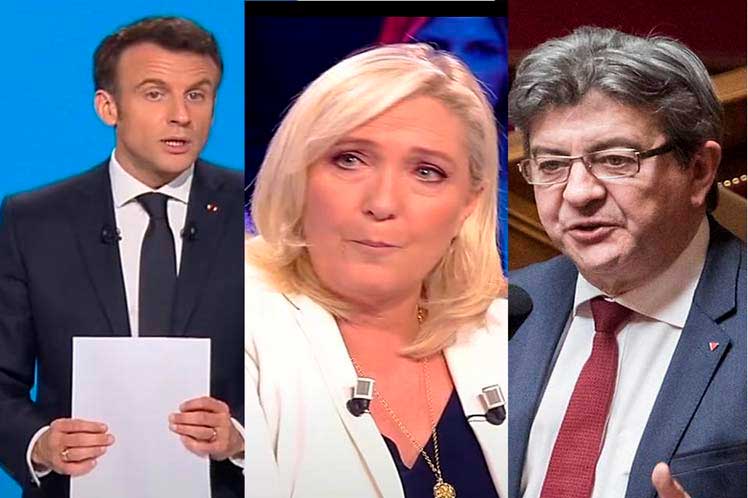 Different visions of the country compete to conquer as many as possible of the almost 49 million registered voters for the elections, an appointment at the polls that could be around the maximum number of historical abstention registered in 2002.

According to recent surveys by the Odoxa Institute for the newspaper Le Figaro and one published by the Franceinfo network, the rate of absent citizens from voting would reach 28 percent, very close to that reported two decades ago (28.4), with young people from between 18 and 24 years as the most likely to abstain.

This scenario and the doubts that many voters have when defining their inclination, feed the hopes and expectations of the three main candidates, of the 12 in contention: President Emmanuel Macron, the leader of the extreme right Marine Le Pen and the head of La France Insumise, Jean-Luc Mélenchon, the last two on their third attempt to reach the Elysee.

Macron has fallen several points since the end of March, and less than 48 hours before the first round he has 26.5 percent of the voting intentions, according to the summary of polls updated daily by the French Institute of Public Opinion (IFOP). ).

The outlook is different for Le Pen, while Mélenchon constitutes the hope of the left and progressive forces, at least for most of those sectors, of avoiding the eventual reissue of the 2017 runoff, when the head of state and leader of The Republic on the Move comfortably defeated the far-right and creator of the National Association.

The daughter of Jean-Marie Le Pen is getting closer to a technical tie with Macron, receiving 24 percent support in the IFOP publication, while the rebellious deputy reaches 17.5, both confirming the upward trend in potential backups.

The trio of favorites seems to bury the other two candidates who had scored points in the advanced group, even with the possibility of advancing to the second round at some point, the also exponent of the extreme right Éric Zemmour and the conservative Valérie Pécresse, now placed below double digits of voters in his favor for Sunday.