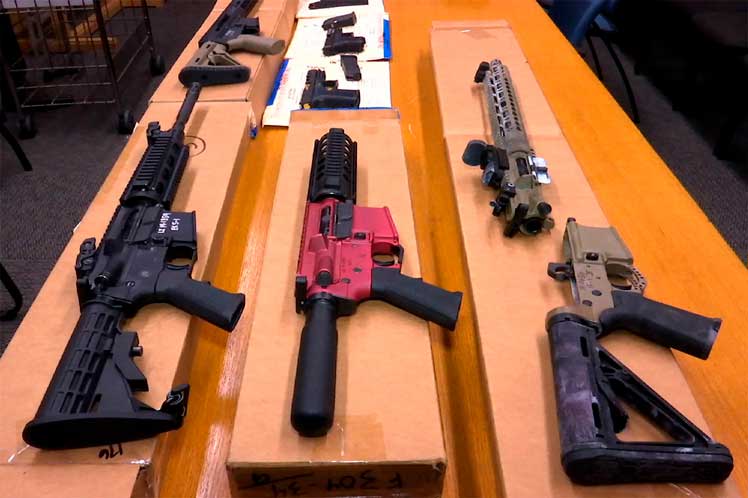 By Alejandra García Elizalde
The President of the United States, Joe Biden, announced his interest in regulating the so called “ghost guns” in view of pressures on his administration and the head of state’s low popularity because of the growing violence hitting the country.
Share on facebook
Share on twitter
Share on whatsapp
Share on telegram
Share on email

From his 2020 presidential campaign on, the Democratic ruler pledged to stop gun incidents, but has not taken strong action to keep his promise.

Another shooting occurred this week in New York’s subway, where a dozen people were injured.

It’s still unknown if assailants used these devices, which can be assembled at home, using parts sold on the Internet or made by 3D printers, but statistics show that people who commit these crimes do it with such firearms.

They have no serial number and are sold without checking the person’s record, which makes them easier to buy and hard to find.

Although they represent a relatively small percentage of the total number of firearms recovered by law enforcement agencies, authorities have reported that the number has increased.

For example, in San Francisco, California, nearly 20 percent of the almost 1100 arms impounded in 2021 were “ghost guns”, the local police reported.

According to Biden, the administration is designing a new way to make it illegal to manufacture guns without a serial number or to prevent licensed salesmen and women to sell them without checking the antecedents.

It’s not an extreme measure, as the arms industry intends to put it, but it’s common sense, the president added.

Last year the Bureau of Alcohol, Tobacco, Firearms and Explosives has tracked at least one percent of the devices reported by law enforcement.

Until now, the states and local governments use the tools at their disposal to face crime, but the White House must respond as soon as possible, Connecticut Democratic Senator, Chris Murphy, said.

Biden’s approval rate due to his management of violence has dropped to 37 percent, while shootings are on the rise throughout the country, according to ABC News/Ipsos polls.

A research conducted by the magazine Trauma Surgery and Acute Care Open revealed that deaths by shooting surpass those caused by car accidents.

Violence is an epidemic that is draining the country and will only be stopped by taking strong action. Today is the time, officials concluded. Photo caption: They can be assembled at home, using parts sold on the Internet. (Published in Orbe)