Russia: more than 6,800 foreign mercenaries are present in Ukraine 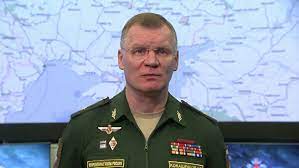 Russia: more than 6,800 foreign mercenaries are present in Ukraine

As per the report, the largest number, 1,717, came from Poland; 1,500 are from the United States, Canada and Romania; 300 from both United Kingdom and Georgia, and 193 arrived in Ukraine from the Turkey-controlled region of the Syrian Arab Republic.

He added that most of them are now embedded with the Ukrainian units fighting in the cities of Kiev, Kharkov, Odessa, Nikolayev and Mariupol.

The mercenaries were integrated into the units by the regional coordination headquarters of the so-called International Defense Legion of Ukraine, in the city of Bila Tserkva/Belaya Tserkov, he said.

According to Konashenkov, the number of mercenaries is steadily decreasing as a result of the fighting, and at the moment there are less than 5,000 of them.

“The Russian Armed Forces killed 1,035 in combat operations and another 912 mercenaries refused to take part in the fighting and fled the country,” he stated.

Konashenkov recalled in his daily report to the press that foreign mercenaries do not have the status of combatants, according to international humanitarian law.

“They came to Ukraine to earn money by killing Slavs. Therefore, the best that awaits them is criminal responsibility and long prison sentences,” he highlighted.