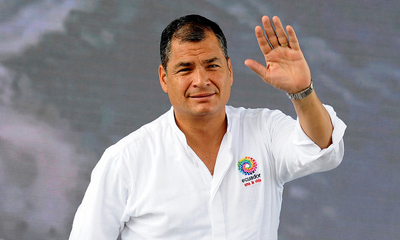 In a bulletin sent to Prensa Latina, the jurists indicated that, with the measure, the executive of the European country recognizes the political persecution carried out by the Ecuadorian Government against the former president (2007-2017).

“Belgium thus joins countries such as Mexico and Bolivia, which have also welcomed various former government officials and members of Correa’s party as political asylum seekers, victims of evident persecution,” the text specified.

In this regard, Christophe Marchand, coordinating lawyer for the former dignitary’s defense, stressed the measure also highlights the lawfare (legal war) against him and also applied to other representatives of the so-called “correismo.”

For its part, the document also emphasized that the Interpol File Control Commission, in charge of guaranteeing compliance with the regulations in the processing of personal data of the organization, has denied Ecuador all the red alerts against Rafael Correa and its former officials.

The position of the International Criminal Police Organization (Interpol) responds to the flagrant denial of justice in the South American country, the bulletin added.

He also stressed that Brussels, the political capital of the European Union and internationally recognized as respectful of democratic institutions, has taken an important step in recognizing political persecution in Ecuador, whose main objective is the political banning of Rafael Correa and his movement called Citizen Revolution.

The law firm recalled that the former head of state was elected three consecutive times as president of Ecuador and governed with great popular support, after which he established his residence in Belgium, his wife’s country of origin.

After becoming the main opponent of the successive government (Lenín Moreno), he began to receive, like his supporters, brutal judicial harassment, whose climax was a spurious sentence and suspension of political rights a few hours before his registration as a candidate for the elections of the year 2021, the text pointed out.

On his side, despite other failed attempts, the Ecuadorian executive insists on taking action against the former president and, in that sense, the day before the president of the National Court of Justice, Iván Saquicela, had signed the order to start the process of his extradition.