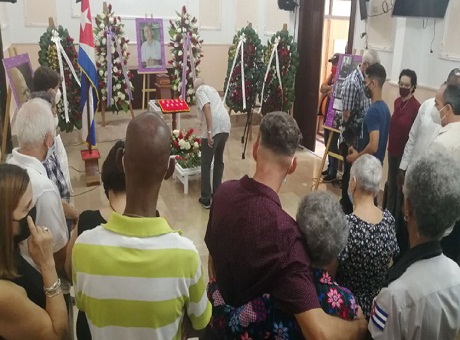 President Miguel Díaz-Canel, Army General Raúl Castro, and members of the island’s journalistic guild sent flower offerings to highlight the life of Nicanor León, who published a dozen books, including: Besieged Hope, The Blockade to Cuba and Barbados Crime.

León was a member of the Association of Young Rebels, the National Revolutionary Militias, the Committees for the Defense of the Revolution and member of the Communist Party of Cuba.

The vice president of the Union of Cuban Journalists (UPEC), Jorge Legañoa, recalled Nicanor León’s career in media outlets such as Prensa Latina and Granma, in which he devoted his pen to denouncing the United States blockade against the island and acts of terrorism perpetrated with the consent of Washington, he said.

He pointed out that León’s journalistic work caused such an impact on the Central Intelligence Agency (CIA), that it was even speculated that behind his signature there was not a man of flesh and blood, but a team of Cuban agents.

He also highlighted the altruistic and selfless sense that characterized the writer throughout his life, since he always ceded his copyright fees and donated related income to Cuba’s defense.

Nicanor León was awarded several distinctions and recognitions, among them: the Combatant medal in the Clandestine struggle, the XX Anniversary of the Revolutionary Armed Forces and the Félix Elmuza distinction, the highest award granted by UPEC.

His body was cremated by family decision and his remains will be transferred to his native province of Artemisa, located in the west of the country.