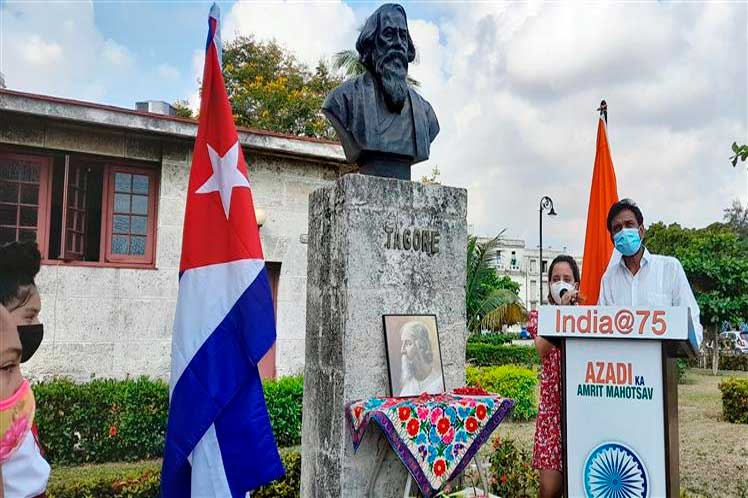 The Indian diplomat chaired the celebration on Tagore’s 161st birth, at the monument in front of the entrance to the Bay of Havana, to which Cuban schoolchildren from the special classroom at the Casa de Asia Museum, attached to the Office of the Historian of Havana, also paid tribute.

Tagore was a poet of Bengali origin, a philosopher of the Brahmo Samaj movement, an artist, playwright, musician, novelist and songwriter who was awarded the Nobel Prize for Literature in 1913. In fact, he was the first non-European laureate to win that recognition.

He revolutionized Bengali literature with such works as Home and World, Spring Cycle, Gitanjal, and The King’s Postman. He spread the wide Bengali art with multitude of poems, short stories, letters, essays and paintings.

In his thought, love prevailed as the “ultimate meaning of everything that surrounds us. It is not a simple feeling, it is the truth, it is the joy that is at the origin of all creation.”

As part of his progressive thinking, he also promoted the idea that “man in his essence should not be a slave, neither to himself nor to others…”

His musical work “My Golden Bengal” became the national anthem of Bangladesh, composed during the protests against the Bengal partition project presented by Viceroy Lord Curzon in 1905. It was officially adopted in 1972, Ambassador Janakiraman recalled.

As part of the event, prizes were awarded to students who won the contest organized by the Rabindranath Tagore Library in the categories of poems, paintings and works on the work and life of the prestigious intellectual.