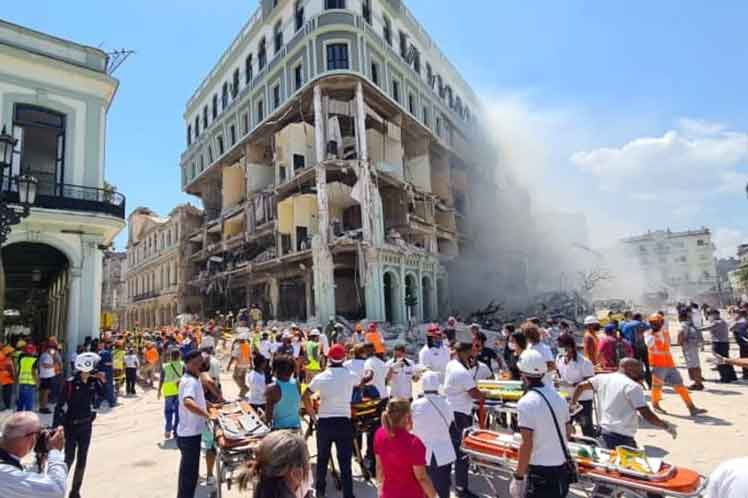 Havana, May 10 (Prensa Latina) The Pan American Health Organization (PAHO) manages the donation of medical supplies to Cuba in support of the emergency created by the explosion of the Saratoga hotel, which occurred last Friday in this capital, they disclosed today.

According to a statement from that entity, the Antillean country has covered all the demands required in the health services involved in this situation, so that such contribution, above all, will allow to replace a part of the supplies used.

According to the information, the first of two kits is made up of three modules: one with basic medicines, and the other two with expendable material.

With these products, it is estimated that 50 hospitalized people can be treated, who, eventually, could undergo up to two surgeries, PAHO said.

The second will provide the country with more material for sutures and cures.

Likewise, the statement added, the technical cooperation of PAHO/WHO was immediately made available to the National Health System.

With much regret, the information revealed, from the representation of that organization in Cuba, the tragic events of last May 6 at the Saratoga hotel are followed, as well as the repercussion that this has had in the field of health.

After the unfortunate accident, Dr. Carissa Etienne, director of PAHO, expressed to the Minister of Public Health, Dr. José Ángel Portal, her feelings of solidarity with the Cuban people and her condolences to the families of the deceased, the report noted.

As has been customary in the face of other disasters faced on the island and other nations in the region, he continued, PAHO/WHO remains ready to provide collaboration in order to help protect the physical and mental well-being of people.

In the midst of so much pain, she reiterates her support for the families that have been affected, she remarked.

The Saratoga hotel suffered last Friday around 11:00 local time, the collapse of several structures, including the side and front facades, caused by an explosion while a tanker truck with liquefied gas was supplying its facilities.

To date, the island’s authorities report 42 deaths and 96 injuries.