Colloquium Voices of the Republic concluded in Sancti Spiritus, Cuba 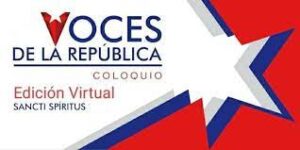 Colloquium Voices of the Republic concluded in Sancti Spiritus, Cuba

Minutes before, it was recalled that this Friday tribute is paid to the victims of the accident that occurred a week ago at the Saratoga hotel in the Cuban capital, due to the explosion due to a gas leak, pain of all the people who joined this conclave, the only one of its kind in Cuba.

The doctor in Historical Sciences Francisca López emphasized the impact caused by the death of José Martí (1853-1895) in figures as relevant in the wars of independence as Major General Máximo Gómez, who transcended with the epithet of El Generalísimo.

Likewise, she named Sancti Spiritus Major General Serafín Sánchez who also went to pay homage to the National Hero, considered the most universal of Cubans, in the place where he fell.

Hence, she commented, poems emerged at the time -such as the one by Mercedes Matamoros-, caricatures and songs such as Clave a Martí, which the panelist called a lament for the Republic that was dreamed of and was not achieved, where the Apostle is named as brother martyr.

In addition, she highlighted how, for the revolutionaries Rubén Martínez Villena and Julio Antonio Mella, the reception of Martí becomes a tool of combat, of struggle.

For his part, Juan Lázaro Besada, another of the panelists, referred to the first bibliographies on José Martí and pointed out that Martí’s reception in the Republic was marked by minimizing the anti-imperialist edge of the one known as Maestro.

It is up to us to study Martí and give thanks for having us such a patriotic and humane figure, he concluded.

Meanwhile, Juan Eduardo Bernal, president of the branch of the José Martí Cultural Society in the province, said that Martí is a permanent call and praised the presence of young people at the event, which he considered a commitment to the country from Sancti Spíritus.

López donated to the Rubén Martínez Villena provincial library – headquarters for three days of the theoretical sessions –two books of her authorship, and several discs under the title Colloquium Postcolonialism and utopia in the Bicentennial.

Finally, the call for the 24 Voices of the Republic Colloquium was launched, scheduled for May 11-14, 2023, which will also commemorate the 170th anniversary of José Martí’s death in combat.

In the one that just concluded, the centenaries of the University Student Federation, of the Cuban Radio and of the Parranda Típica Espirituana were highlighted, as well as five provinces of the country were represented and more than 30 works were exhibited.