Argentina reiterates at the UN its sovereign right over the Malvinas 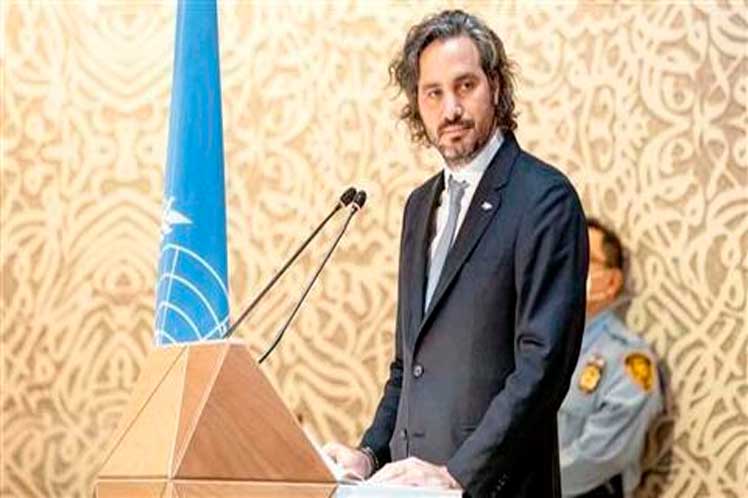 Argentina reiterates at the UN its sovereign right over the Malvinas

In a speech before the United Nations (UN) Decolonization Committee, the Foreign Minister denounced the United Kingdom’s refusal to resume negotiations on the bilateral dispute and the British government’s violation of Argentina’s territorial integrity.

We reiterate our unwavering commitment to the recovery of the effective exercise of our sovereignty. The arguments that support our position are known because we have been repeating them for 189 years, he said.

The ethnic composition of the islands is the result of the colonization initiated by London in 1833, which tried by all means to preserve the British character of that population. As a consequence, the right to self-determination is not applicable. On the other hand, the integrity of Argentina, which was broken in an act of force, should be respected, he added.

Likewise, he asserted that the 1982 armed conflict between both parties did not alter the nature of the sovereignty dispute, which is still pending negotiation and solution.

Cafiero urged the UK to comply with the resolutions of the UN General Assembly that ask the two countries to resume dialogue on the issue.

In 1982, at the time of the hostilities in the South Atlantic, Argentina was governed by an illegal and illegitimate military junta that acted behind the back of the people. Today we are a democratic nation committed to efforts to resolve differences in accordance with the UN Charter and its provisions, he explained.

For the United Kingdom, the Malvinas is domination, speculation and opportunism. For us it is sovereignty, justice and pain for those who fell in war, he indicated.

Cafiero recalled that this is not only a national cause, but a global cause, since it is about confronting the anachronism that colonialism represents in the 21st century.

There are currently 17 such cases pending resolution, of which 10 involve London. It is time for the United Kingdom to respect the resolutions of the body of which it is a part. Neither Argentina nor the law admits the force of the usurpation, he pointed out.

On the other hand, he denounced that the British government unilaterally grants fishing licenses in the areas surrounding the islands and persists in the exploration and exploitation of non-renewable resources that do not belong to it.

In addition, he maintains an unjustified and disproportionate military presence in the Malvinas and regularly carries out maneuvers and exercises that include firing missiles. Added to this is the existence of ships capable of carrying and using nuclear weapons, he criticized.

We express our concern, especially after learning through recently declassified British documents that, during the 1982 conflict, London sent ships equipped with 31 nuclear weapons to the region, he added.