British railway workers resume strike with no solution in sight 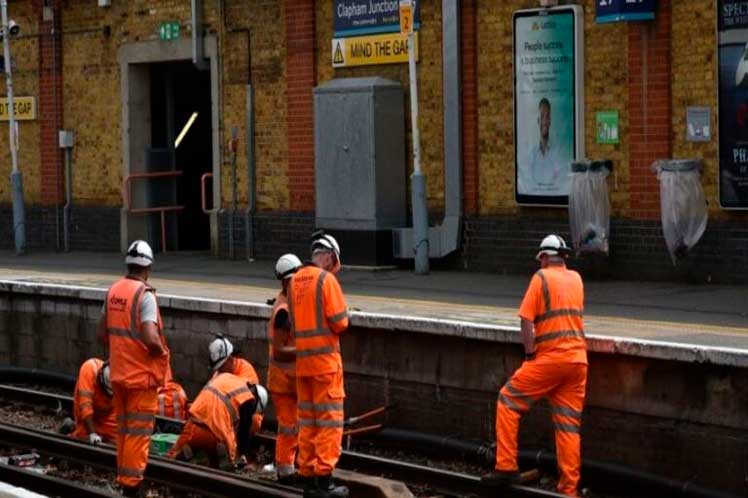 British railway workers resume strike with no solution in sight

According to reports, only one in five trains will circulate on Thursday, the second day of the intermittent strike started on Tuesday by 40,000 members of the National Union of Railway, Maritime and Transport Workers (RMT).

The only difference is that the London Underground workers who joined the protest two days ago returned to their jobs on Wednesday, and the service is operating normally.

The RMT general secretary, Mick Lynch, confirmed to the press that the negotiations will resume in the next few hours, in a new attempt to reach an agreement that seems elusive, given the refusal of the employers to grant their employees a seven percent salary increase to help them face inflation close to double digits.

The union leader, who accuses the conservative government of torpedoing the talks, said that the strike could be repeated on Saturday, and then resume in two weeks, because according to the laws, the unions need to notify their employers 14 days in advance that they will go on strike.

In the words of Lynch, much progress would have to be made (in the talks) to stop the protests, “and I don’t think that can be achieved”. He also assured that the RMT maintains a constructive position in the negotiations with the railway companies.

According to the Business Minister, Kwasi Kwarteng, the bill to be presented to Parliament would allow companies to hire temporary workers to fill the positions of employees who declare themselves on strike, which is rejected by the opposition Labor Party and the unions, considering it an attack on the right to strike in force since the 1970s.

Last attempts to avoid rail strike in the United Kingdom

Tunisia is semi-paralyzed by strike in public sector

Last attempts to avoid rail strike in the United Kingdom

Tunisia is semi-paralyzed by strike in public sector