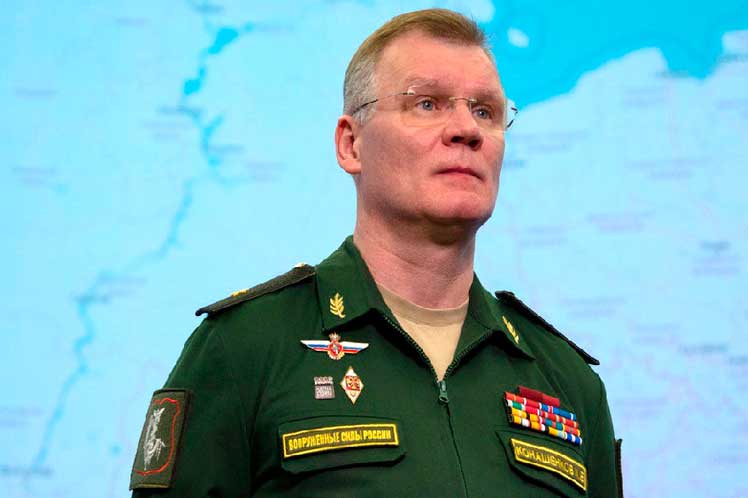 In his usual appearance to the press, the spokesman for the Russian Defense Ministry, Major General Igor Konashenkov, said the eliminated troops belonged to the 1st battalion of the 30th Prince Konstanty Ostrogski Mechanized Brigade of the Ukrainian Ground Forces, where around 15 military units were also wiped out.

Konashenkov added that the Russian jets also bombed the temporary ammo storage base of the 10th Mountain Assault Brigade, located at a Kharkov tractor plant.

“Up to 30 troops and 10 armored and motorized vehicle units were destroyed,” Konashenkov added.

Likewise, he detailed they shot down five command posts in the areas of Artemivsk and Chasov Yar in the self-proclaimed Donetsk People’s Republic (DPR), as well as Pervomaiskoye, Zeleny Gai and Barmashovo in the Nikolayev region.

The Russian Defense Ministry spokesman also stated they also eliminated three ammo depots in the Shevchenkovo and Novogrigorovka areas in the Zaporozhye region.

The official representative of the Russian military department explained that since the beginning of the Russia´s special military operation in Ukraine, on February 24, the Russian Armed Forces have destroyed a total of 226 planes, 134 helicopters, and 1,411 unmanned aerial vehicles.

In his speech to inform about the beginning of the special operation, Russian President Vladimir Putin stated that the major objective is to protect the population of Donbass from abuses and genocide from Kyiv during the last eight years, in addition to “demilitarizing” and “ denazify” Ukraine.

Russia announces the liberation of Blagadatnoye in Donetsk

Russia announces the liberation of Blagadatnoye in Donetsk