Diaz-Canel calls for action to solve economic problems in Cuba 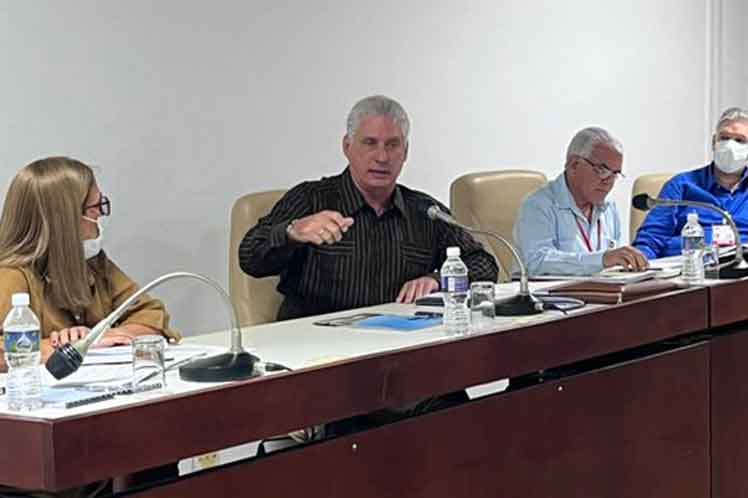 Diaz-Canel calls for action to solve economic problems in Cuba

Havana, Jul 20 (Prensa Latina) Cuban President Miguel Diaz-Canel on Wednesday called for more action to solve the country's economic problems, with emphasis on the municipalities, committed to achieving autonomy in its management.

Speaking at the debate of the Economic Affairs Commission of the National People’s Power Assembly (Parliament), the president insisted on the need to ensure that the territorial development strategy has a robust local production system, for which the state and private business structure must pay taxes to the municipality.

The work must be oriented towards seeking financial resources, said the head of State, adding that reservations are in the elimination of excessive expenses of each one of the structures, of inappropriate prices and of underreporting, as well as in the collection of all income.

We all have to build the country, we all have to build well-being, Diaz-Canel emphasized, and noted the urgency of taking actions to solve the problems identified over and over again; the topic is one of political discussion and action, he stressed.

The president alluded to the importance of moving to a business resizing in two fundamental areas, one of these related to subordination, since many institutions respond to national and provincial structures and, therefore, the payment of their taxes does not benefit the municipalities where they act.

The other area is that referring to the business structure, due to the persistence of administrative apparatuses above needs and to the detriment of productive ones, or the distortions of entities that, instead of fulfilling their social function of generating wealth, they become service providers.

Diaz-Canel called for further exploitation of the approved powers for better business performance, but based on greater efficiency, not to make profits based on raising prices and distributing money at all costs without creating new goods.

He commented that the visits by the Government and the Secretariat of the Central Committee of the Communist Party have detected violations regarding the cost sheets of products, the first step in establishing prices.

He mentioned, as an example, places and products for which these do not exist, or that charge salary costs to the lines of greatest demand in the market, instead of distributing them among the entire range of offers, which results in a disproportionate increase in wages and prices.

The distortions in this matter were harshly criticized by the head of State, who called for confronting the phenomenon through action in the municipalities, both in the state and private sectors.

The budget cannot finance inefficiencies, he explained, it is to improve social works, health care, education, care for people in vulnerable situations, and we all benefit from that, he pointed out.