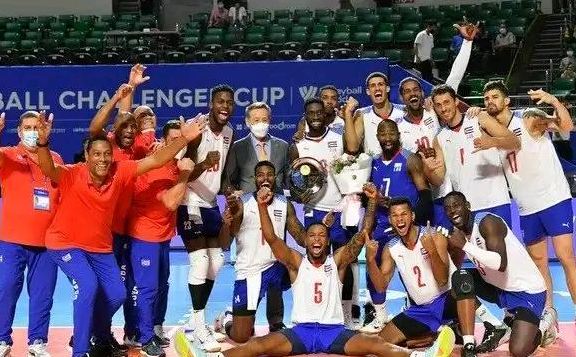 The Antilleans beat the Europeans with runs of 27-17, 23-25, 25-20 and 25-20 to close the match with only one set lost in their three appearances against Chile, the Czech Republic and Turkey.

The star Miguel Ángel López led the offensive of the Caribbean with 20 points, 16 in the attack, two with the block and the same amount supported in the services, seconded by Jesús Herrera, author of 19 units (16-2-1).

Mergarejo and López finished as service leaders in the competition, with six aces each, and in the case of the latter, he finished third among the best scorers (50 points) and among blockers (seven).

The Antillean team opened with its starting lineup, made up of passer Adrián Goide, assistants López and Mergarejo, opposite Herrera, central defenders Alonso and Javier Concepción and Yonder García as libero, but in the second set Liván Taboada assumed the distribution of the attack .

At the end of the match, Cuban captain López admitted his joy at getting the quota —Cuba had previously finished fourth in 2018 and second in 2019— and recognized Turkey for the match.

“However, we also kept our concentration and played a good game. Reaching the League of Nations means a lot, because we had not participated in the elite for several years. It is an honor and a great achievement to represent Cuba in a tournament like this” , he claimed.

This is the best performance of the Cuban team since its presence in the 2016 Olympic Games, the World League of that year, the universal appointment of Italy Bulgaria 2018 and the 2019 Challenger tournament itself.