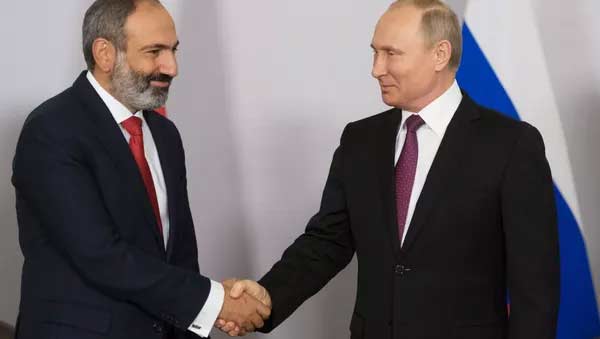 “In the conversation both leaders confirmed the importance of implementing all provisions of the agreements reached between Russia, Armenia and Azerbaijan on November 9, 2020, January 11 and November 26, 2021,” an official statement released.

According to the presidential press service, the dialogue between Putin and Pashinyan took place at the initiative of Yerevan.

Earlier, presidential spokesman Dmitri Peskov confirmed that Moscow was concerned about the escalation of tensions in Nagorno-Karabakh and called on the parties to act with restraint.

On August 3, Armenia and Azerbaijan accused each other of breaking the ceasefire in the area controlled by Russian peacekeepers in Nagorno-Karabakh. Both sides reported fatalities from the clashes.

Military forces of Yerevan and Baku clashed again on September 23, 2020 in this region, a focus of conflict since it separated in 1988 from the then Soviet Socialist Republic of Azerbaijan, with a majority of Armenian population.

The hostilities, which lasted for six weeks and caused thousands of deaths, ceased on November 10, 2020 under a declaration adopted a day earlier by the leaders of Armenia, Azerbaijan and Russia.

By agreement between the parties, Moscow stationed a peace contingent in the area, parallel to the withdrawal of Armenian forces from the districts of Agdam, Kelbecer (Kalbajar) and Lachín, seized from Azerbaijan during the 1992-1994 war.

Last May, the presidents of Armenia and Azerbaijan agreed to begin preparations for peace negotiations and in the same month the deputy prime ministers consolidated the proposal within the framework of the work of the commission for the delimitation and security of borders.

Despite this process of normalization of bilateral relations, the two countries accuse each other of attacks on the border.