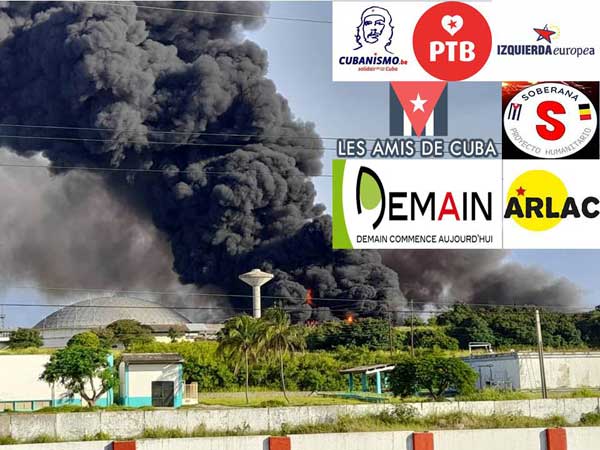 In social networks, through communications or in statements to the press, they lamented the difficult situation that the western city is experiencing and, in particular, its industrial zone, after lightning struck one of the crude tanks of the Supertanker Base last Friday. , unleashing several explosions and a raging fire still active.

On behalf of the Belgian Labor Party, its head of International Relations, Bert De Belder, expressed admiration for the work carried out by firefighters and health professionals in their efforts to extinguish the flames and care for the victims.

Also the Tomorrow Movement, through Maxime Ramirez, one of its leaders, showed solidarity with the island, its authorities and the forces facing the fire and its consequences.

For its part, the Party of the European Left conveyed its condolences for the deceased firefighter and accompaniment to the relatives of the 125 injured, 24 of them still hospitalized.

The organization made up of more than 30 parties ratified in the face of the tragedy its demand for an end to the economic, commercial and financial blockade that the United States has imposed on Cuba for more than six decades.

From Belgian solidarity, the associations Cubanismo.be and Los Amigos de Cuba issued messages of support and reiterated their support for the island in the face of Washington’s economic siege.

Cubanismo.be invited donations to a Globalize Solidarity account with the indication “Urgencia Matanzas”.

The Cuba-Soberana humanitarian association also expressed regret for what happened in Matanzas and announced that it is carrying out actions to send as soon as possible a small load with useful medical supplies in the care of burn injuries.

We are in contact with other Belgian organizations to see what we can do to help Cuba, the coordinator of the initiative, Reinaldo Romero, explained to Prensa Latina.

In another of the pronouncements, the Association of Refugees from Latin America and the Caribbean in Belgium (Arlac) acknowledged the support that Cuba receives, and in this sense stressed that the Antillean nation deserves it, based on the support it has provided for decades to other towns hit by natural disasters and pandemics.

Feelings of solidarity towards the island emanate from all continents, as well as the willingness to send material resources to help stop the fire and face its consequences.

Specialized forces and media from Mexico and Venezuela are already on the ground supporting the fight against the flames.