Fidel Castro returns to the streets of Moscow 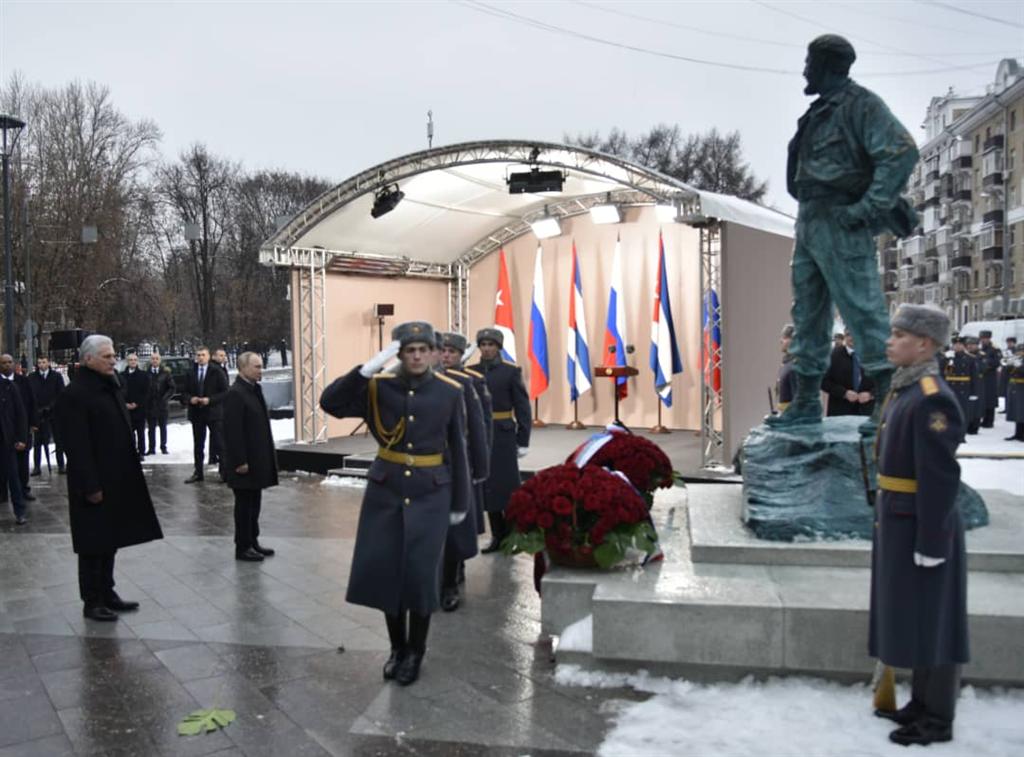 Fidel Castro returns to the streets of Moscow

Moscow, Nov 22 (Prensa Latina) Just as he did 59 years ago, for 38 consecutive days, the historic leader of the Cuban Revolution, Fidel Castro (1926-2016), returned to the streets of Moscow on Tuesday but this time permanently.

The inauguration of a sculpture that shows the greatness and humility of this man who is a paradigm of world society, immortalizes the Cuban strategist with a statue in the square that bears his name since 2017 in Moscow’s Sokol district.

The bronze monument is three meters height and was created in the Russian capital over the course of half a year.

The unveiling of the monumental work was done by Presidents Vladimir Putin (Russia) and Miguel Diaz-Canel (Cuba), who agreed that Fidel Castro’s legacy is fully valid, six years after he died.

The Russian head of State described Fidel Castro as an “outstanding statesman and politician, founder of the modern Cuban State.”

He recalled that his entire life was dedicated to “the selfless struggle for the triumph of the ideas of goodness, peace and justice, for the freedom of the oppressed peoples, for a dignified life for ordinary people and social equality.”

Putin added that Fidel Castro is rightly considered one of the most famous and charismatic leaders of the 20th century, “a truly legendary personality,” he emphasized.

For his part, Diaz-Canel expressed gratitude for immortalizing the Cuban historic leader with such a colossal work, which in his opinion is a sample of how this great human being united peoples who, despite geographical and cultural distance have been brothers for more than 60 years.

The Cuban president paid his respect to Russia and the sculptors for the initiative to create a monument to Fidel Castro and noted that the personality of the leader of the Cuban Revolution is closely linked to the friendship between the peoples and governments of both countries.

The sculpture unveiled on November 22 represents Fidel Castro on a rock on which the map of Cuba is inscribed.

The image intends to reflect the heroic path of the man who defended the rights and freedoms of people in his country.

The Russian Ministry of Defense presented the initiative to create a monument to the Cuban leader, and the idea was supported by the Russian Military-Historical Society, which convened a closed art contest, where 11 works were presented and sculptor Aleksei Chebanenko and architect Andrei Bely were the winers.