The real meaning of blockade for Education in Cuba 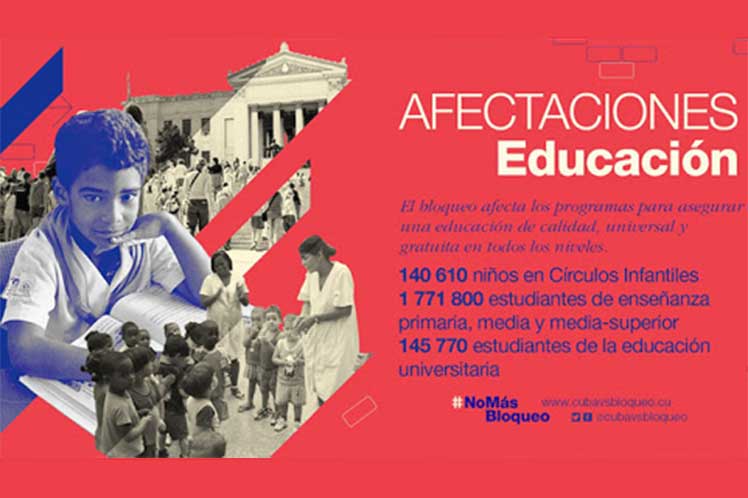 The real meaning of blockade for Education in Cuba

Despite being supported by collaboration agreements between the two countries, the financial institution considered the operation doubtful, a ruse that hides the real reason behind that action: the economic, commercial and financial blockade of the United States against Cuba.

By late 2020, the transfer had not been made and the payment for the services from that African nation, which amounts to more than 190,000 euros (about 214,000 US dollars), had not been transferred to Cuba.

Meanwhile in Havana, calculations are probably made to bring from a distant market the Perkins machines students with visual disabilities needed for learning.

Such is the real meaning of the US siege for Education in Cuba, these examples are only part of a collective history that reflects the cruelty of that policy, with almost six decades of its implementation.

According to the report that includes the damages caused from April 2019 to March 2020, that Cuba will submit in a draft resolution on June 23 at the UN General Assembly, the losses only in this sector reached 21.2 million dollars.

The damages corresponding to the remaining months in 2020, when amid the Covid-19 pandemic the US administration implemented new coercive measures, were also added to the report.

The Cuban Ministry of Education (MINED) published on Tuesday a report that includes from April 1 to December 31, 2020, and reflects how the losses from bringing resources from distant markets increase by more than 49,000 dollars, compared to 2019.

In general, the US blockade hampers the obtention of necessary school and living materials, furniture, essential equipment for a higher quality of the teaching-learning process and even the resources for repairs in the educational centers.

But the real meaning of the blockade goes beyond, this is also the doubt that affects and prevents a transaction at a bank in France.