NEMO reaffirms condemnation of US blockade against Cuba 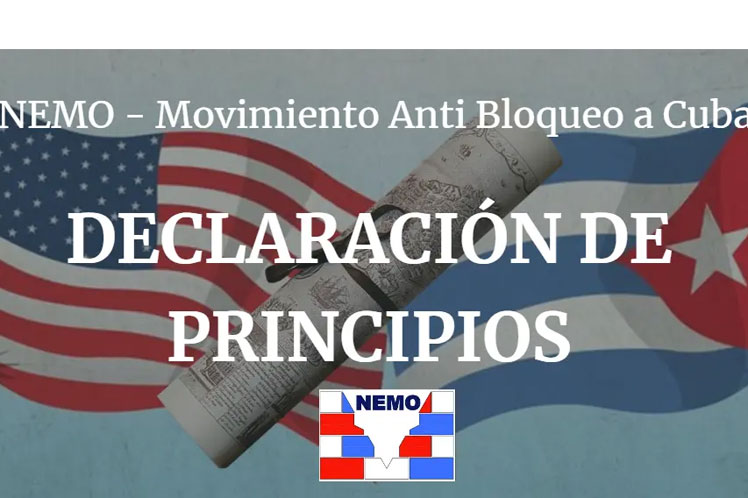 NEMO reaffirms condemnation of US blockade against Cuba

In exclusive statements to Prensa Latina, Manuel Tejeda and Jose Oro, representing the organization’s Board of Directors, pointed out that this process must be followed within unrestricted respect for the sovereign will of the Cuban people to decide for themselves the destiny and social structure they wish to build or maintain, without foreign interference.

Furthermore, NEMO recognizes and respects the struggle of more than six decades by the Cuban Government, the vast majority of United Nations member countries, and many organizations and individuals inside and outside Cuba with respect to the blockade.

‘NEMO unequivocally and firmly denounces the inactivity of President Joe Biden’s administration regarding the Cuban people’s situation amid a terrible pandemic, as well as the president’s failure to comply with his campaign promises,’ the organization’s leaders proclaimed.

They also denounced the irresponsibility of the State Department, which far from complying with the voters’ mandate to improve relations with neighboring countries, is dedicated to publishing incomplete, inaccurate and biased reports, which further hinder ties between Cuba and the United States.

At the same time, they assured that the Democratic president of the United States has not revoked a single one of more than 240 measures that Donald Trump added to the blockade.

It seems that ‘Biden is flirting with the ultra right-wing Trumpists in Florida who did not vote for him, instead of listening to the voice of the majority of Cuban-Americans who supported him, confident that he would do something good regarding bilateral ties’, they added.

They explained that NEMO is not subordinate to nor is it financed or sponsored by any governmental, political or social organization in Cuba or any other country, although it ‘supports the legitimate actions of the Government of the Republic of Cuba in its confrontation with the genocidal policy of the United States’.

According to the directors, the key to the success they seek lies in the ability to unite the efforts and experience of all participants in a novel mass movement within the United States, ‘which is where this criminal monstrosity will be defeated’.

The blockade not only affects the Cuban people and Cuban-Americans, but also US citizens, who are limited in their individual freedoms to trade with whomever they want to and travel wherever they want to, while at the same time, it prevents them from having access to Cuba’s innovative technologies and results in the fields of medicine and biotechnology.

In their statements to Prensa Latina, the anti-blockade activists pointed out that NEMO defines itself as a humanitarian movement for the Cuban family in which very different people, with very diverse points of view, participate.

They added that their intention is ‘to become the legal entity necessary to achieve the support we need in the United States’.

The activists pointed out that NEMO calls the set of sanctions against Cuba a blockade and not an ’embargo’, which is the term known by the US people, who are the main target in the recruitment of members.

The difference lies in the fact that ’embargo’ is a category to designate financial sanctions, while ‘blockade’ is, since the London Conference of 1909, something recognized as an act of war.

On the other hand, the Movement’s Digital Platform, NoEmbargoCuba.com, in Spanish NoBloqueoCuba.com, already ranks among the 100,000 most popular websites in the United States.

Next month, Cuba will take to the United Nations General Assembly (UNGA) the resolution it presents every year to call for the end of the blockade, which in 2020 had to be postponed due to the Covid-19 pandemic.

Since November 24, 1992, the UNGA has voted every year against the coercive measure, reflected in an almost unanimous vote in favor of the elimination of the blockade.

In the latest vote on a UN motion against this unilateral measure in November 2019, it won the support of 187 of the 192 member countries.