ICAP commemorative stamp given to Pastors for Peace 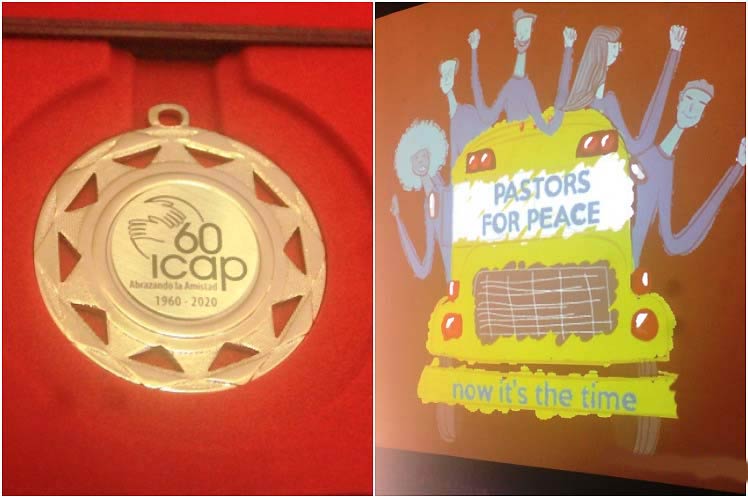 ICAP commemorative stamp given to Pastors for Peace

In these almost 30 years of the caravans of Pastors for Peace, many things have been achieved, said Walker on behalf of the organization during the ceremony of delivery of the recognition that, exceptionally, confers the Cuban Institute of Friendship with the Peoples (ICAP) to groups and personalities with outstanding and uninterrupted work in favor of the island.

Visibly moved, the daughter of the late Reverend Lucius Walker said that the Interreligious Foundation for Community Organization (IFCO) -Pastors for Peace is struggling hard. ‘We are all united when it comes to a single objective of solidarity with Cuba.’

For his part, Fernando González, president of ICAP, highlighted the history of work that, in defense of the Cuban Revolution, more than two thousand friendship associations and solidarity groups in 163 countries have undertaken from different continents of the world.

‘When many thought that the Cuban Revolution would collapse together with the former socialist camp, IFCO-Pastores por la Paz opted for social activism and understood like few others the consequences of the unjust blockade imposed by the United States government,’ he stressed.

He recalled that the first caravan was organized in 1992 thanks to Reverend Lucius and since then Pastors for Peace has shown with their love and friendship that a better world is possible.

Cuba needs hands in solidarity that stand together in defense of its sovereignty, González concluded.

As Gail Walker anticipated in an interview with Prensa Latina, the Covid-19 pandemic prevented the caravan in 2020 and will not make it possible ‘for us to travel in July as we have done for many years’, but’ we are determined to come this year in the fall, about October or November. ‘