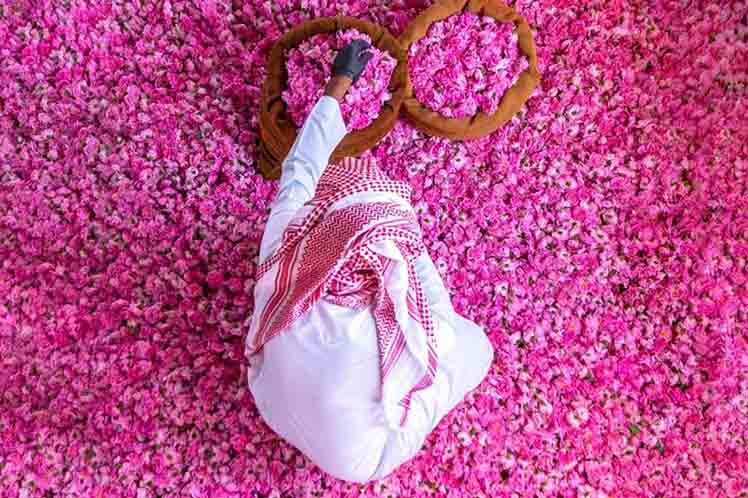 An essential oil is extracted from the flower that blooms from April to May and is used to clean the outer walls of the Kaaba, also spelled Kaʿbah, small shrine located near the center of the Great Mosque in Mecca and considered by Muslims everywhere to be the most sacred spot on Earth.

Farmers harvest tens of millions of these rare specimens, which are highly prized in the cosmetic and culinary industry. The essence of these flowers is very popular with visitors to the desert kingdom.

The area of Taif, in particular, delivers some 300 million of the plant species that thrives in the face of drought and water scarcity every season.

According to Khalaf al-Tuweiri, the process involves boiling the roses for 30 to 35 minutes, then lowering the heat for about 15 minutes until the distillation process begins, which takes eight hours.

Al-Tuweiri owns a farm that he inherited from his ancestors and from generation to generation passed down the secrets to process the revered oil which some attribute it to divine qualities.

After purification, they fill containers of different sizes and the smallest, about 100 milliliters, costs about 106 dollars.

The roses grow in the Wadi Maram valley, in Al Hada, and in Al Shafa, at an altitude of 2,500 meters, in mountains south of Taif.

This wonder of nature, harvest in such altitudes, with 30 petals and intense perfume surpasses in freshness its close relatives, the roses of Damascus, and are an essential part of the entity of the urban center and its main economic support.