Spain reiterates its support to Argentina in dialogue with IMF 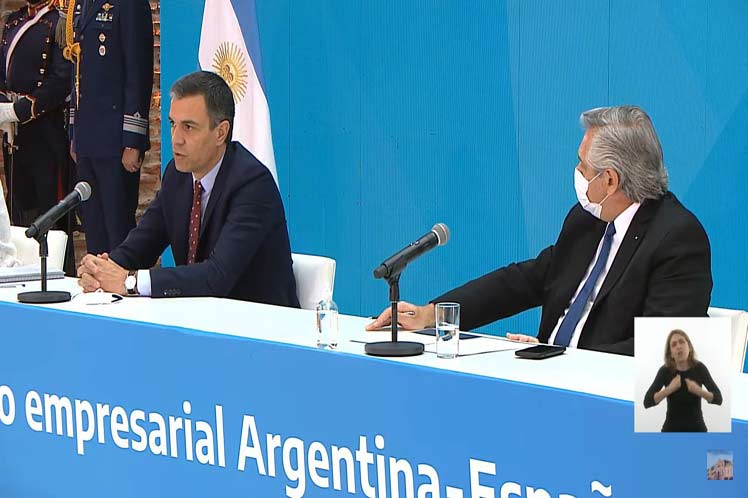 Spain reiterates its support to Argentina in dialogue with IMF

In his first visit to the Casa Rosada under the presidency of Alberto Fernández, Sánchez highlighted the close ties between both countries that go beyond the bilateral agenda and pointed out that Spain will always be on the side of Argentina in its conversations with the IMF .

Speaking at a meeting with businessmen from both nations at the Bicentennial Museum, the Spanish ruler pointed out that in the post-pandemic Europe can be a great ally of Latin America.

I think it is essential that they feel Spain as the gateway to Europe, he told those present, after stating that more can be done in common and together.

Sánchez referred to the situation of Covid-19 and opted to increase the capacities of the production of vaccination and above all to accelerate the distribution of vaccines.

In that sense, he meant that two progressive governments such as Argentina and Spain should lead this debate within world organizations.

‘The defense of life is what we are playing with this pandemic,’ said the Spanish president, who supported the measures of the Argentine president to preserve the lives of his compatriots.

At another time, it meant that today there are very difficult times for the rulers with very complicated decisions, but there is a future, there is a horizon and in a very short time we hope to achieve that group immunity that allows us to overcome this once and for all. calamity.

On his part, the Argentine head of state highlighted the very similar look and the vocation of both to change the world, and opted for the global socialization of anti-Covid-19 vaccines and that all the peoples of the world can access them.

Fernández highlighted the indissoluble ties between Spain and Argentina and invited businessmen from both nations to this unique opportunity to understand each other and move forward.

‘I would like this to be the beginning of a time in which we make our ties even more solid. We have all the conditions in place for both countries to join forces and take advantage of opportunities,’ said the Argentine president.

Likewise, Fernández stressed that the pandemic made it clear that the economy as it worked was not the best version, since it concentrated income in very little and built millions of poor people and against an imperceptible virus, everything collapsed without distinguishing rich and poor .

Thanking Spain for accompanying Argentina, he called for strengthening ties and joining forces on both sides of the Atlantic.