Johnson and Biden meet in Cornwall ahead of G7 Summit 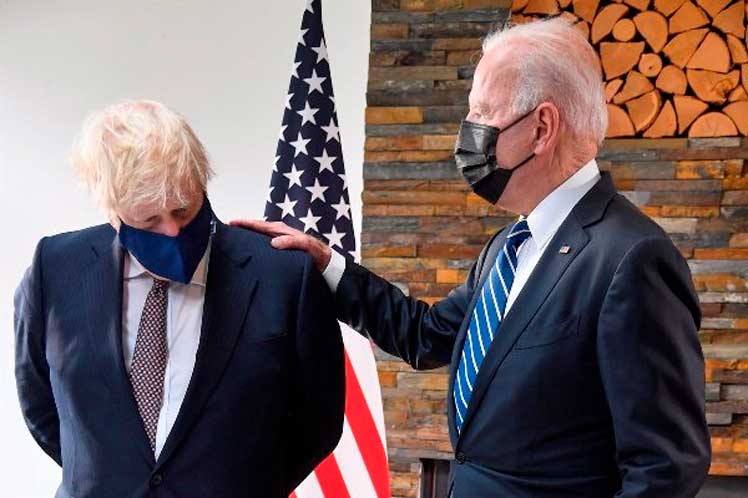 Johnson and Biden meet in Cornwall ahead of G7 Summit

In brief statements to the press after walking with their respective wives on the beach in front of the Carbis Bay hotel, in Cornwall, the rulers exhibited a jovial tone, as if to deny reports that Biden had come to recriminate his host for wanting to violate the Brexit deal for Northern Ireland.

I told the prime minister that we have something in common, and that is that the two of us got married beyond our means, joked the American president in front of the television cameras after the walk.

Johnson, on his part, assured that he was not going to contradict his guest on that, or on any other matter.

Churchill and Franklin D. Roosevelt in 1941.

As the British Prime Minister’s office announced the day before, the text will include the new objectives of bilateral cooperation, which will range from the recovery of the Covid-19 pandemic, climate change, security and the global trading system, to the steps to be taken to safely resume transatlantic travel.

The agreements that we will sign today, based on our common values ​​and visions, will be the foundation for a sustainable global recovery, Johnson said last night.

The British press claimed that Biden would take advantage of his first presidential trip abroad to warn Johnson that he should honor the commitments made by the United Kingdom after leaving the European Union, and in particular the protocol for Northern Ireland, so as not to endanger peace. that ended the long armed conflict in that British province in 1998.

The White House assured, however, that the president did not intend to interfere in the post-Brexit negotiations and that he did not come to teach his host lessons, although he would advocate for an expedited solution to the problems. In the first face-to-face meeting of the G7 since the start of the pandemic last year, the bloc formed Germany, Canada, the United States, France, Italy, Japan and the United Kingdom plans to address the distribution of vaccines against Covid-19 and the change climate, among other pressing issues.