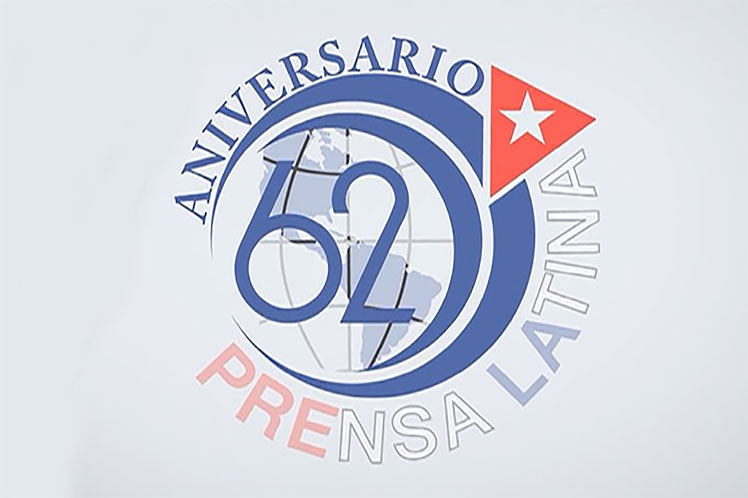 In a message published on its official profile on Twitter, the National Assembly of People’s Power of Cuba (Parliament) greeted the event, and highlighted the ‘anti-hegemonic and emancipatory vision’ of this media outlet ‘continuation of the legacy of its main inspirers, Fidel Castro and Ernesto Che Guevara ‘.

In addition, the workers’ union recalled the origins of the institution, inaugurated in this capital on June 16, 1959 by Argentines Jorge Ricardo Masetti and Ernesto Che Guevara, under the initiative of the historic leader of the Revolution, Fidel Castro.

The head of the Ideological Department of the Central Committee of the Communist Party of Cuba, Rogelio Polanco, also congratulated the Prensa Latina collective and paid tribute to its founders. This Wednesday, when recognizing the performance of PL workers, its president, Luis Enrique González, praised the results of the work carried out despite the intensification of the United States blockade and the impact of the Covid-19 pandemic. In a ceremony held at the organ’s headquarters in this capital, he expressed his commitment to do better journalism and increase the scope of its message.

The Secretary of Communication of the Peruvian organization, Luis Gárate stressed the importance of the agency in current times ‘when the crisis and the contradictions of global capitalism deepen, when the fury of neo-fascism and imperialism has been reborn.’

Friends of Cuba in Chile also congratulated Prensa Latina like the Movement of Solidarity with Cuba, through its groups throughout the country, congratulated the news agency on the occasion of its 62nd anniversary. A message sent to the agency’s correspondent in Santiago recalls the words of President Salvador Allende, when he said: ‘Through Prensa Latina, all progressive Americans will shake hands.’

The text also states: ‘the principles that guide the work of the news media are the same, truthful information is what unites the group throughout these six decades.’

He adds that ‘the project to create a Latin American news agency so that the world knows what is really happening and is happening today in the region is the heartfelt aspiration of popular movements and progressive governments.’

For Paraguay’s left-wing party Guasú Front, Prensa Latina became ‘a lantern that continues to shine from Cuba because it truthfully informs our Latin American peoples’. The congratulations to the international media, which emerged six months after the triumph of the Cuban Revolution led by Fidel Castro, followed the one given the day before by former Paraguayan president Fernando Lugo.

Prensa Latina, said Lugo, ‘became an informative trench in defense of the truth and the sovereignty of Cuba and our peoples’, said Lugo, who was removed from office by impeachment’was the forty-eighth Paraguayan president, a position he assumed on August 15, 2008, after the April 20 elections, until June 22, 2012, when he was removed from office by impeachment.