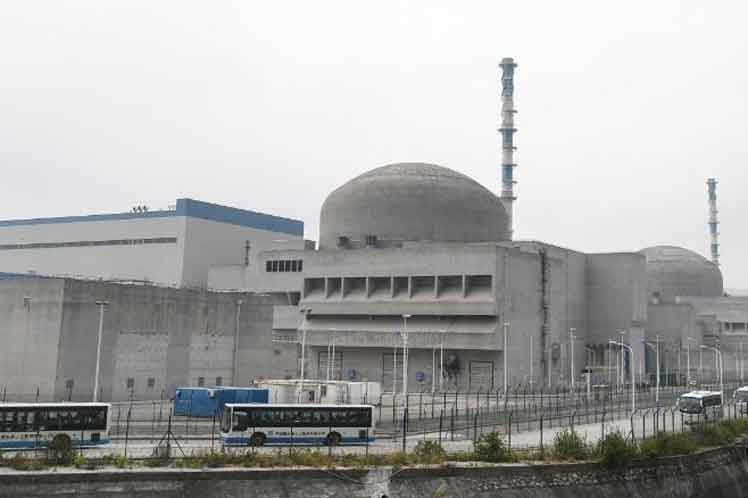 Beijing, June 17 (Prensa Latina) China notified the International Atomic Energy Agency (IAEA) about a monir damages in fuel rods in one of the reactors in Taishan nuclear power plant and assured there was no radiation and it is operating safely, the local press reported today.
Share on facebook
Share on twitter
Share on whatsapp
Share on telegram
Share on email

According to Global Times newspaper, the National Atomic Energy sent a message to the world agency denying information about an alleged gas leak with environmental impact.

In the note, the Chinese authority indicated that it was a “common thing in operating a nuclear plant and was solved in accordance to established standard procedures”.

Damaged fuel rods caused the increased level of radioactivity inside the primary circuit. However, a small amount of fuel rod damage during operation is inevitable and a common phenomenon due to uncontrollable factors during fuel manufacturing, transportation and loading, the Ministry of Ecology and Environment said in a statement.

“Many nuclear power plants around the world have experienced fuel rod damage but continued operation,” the ministry added.
It also mentioned that the monitoring and assessments carried out by experts ruled out any alteration in the site´s indicators, there was no evidence of radioactivity either, and they confirmed the equipments´ good technical condition.

The housings of about five of the more than 60,000 fuel rods in the No 1 reactor are estimated to have been damaged, accounting for less than 0.01 percent of the total number, far lower than the assumed maximum damage proportion of 0.25 percent in the design for the reactor, the ministry further explained.

This week, first, the Chinese Nuclear Energy General Corporation and then, the Ecology and Environment Ministry, denied a report made by US media about an alleged gas leak and other irregularities in Taisha plant, located in the province of (south) Guangdong.

Both government agencies declared the plant is working normally and since it started its commercial services with the two reactors, it has always worked sticking to the established procedures.

These devices are a joint venture between the Corporation and Electricité de France group(EDF), each one of them is able to generate a thousand 750 megawatts and the first from the two is operating since December, 2018 and the other from September, 2019.