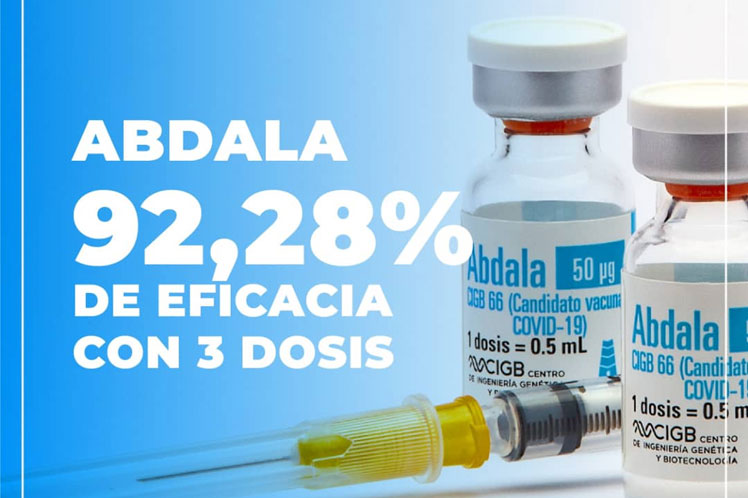 Engineered by the Biotechnology and Genetic Engineering Center (BGEC), the drug showed these numbers in its three-dose program, fulfilling the requirements by World Health Organization (WHO) to become a vaccine.

The good news of this drug´s effectiveness transcended borders this Monday and many have been the acknowledgements abroad.

Listín Journal newspaper, CDN and NDigital television chains, from Dominican Republic, published the information broadcast yesterday and highlighted the Cuban achievement, specifying that Abdala gets to be the second vaccine candidate from the Caribbean island to meet the requirements set by WHO.

Abdala´s good news is added to the previous one reported by the Finlay Vaccine Institute (FVI) from the Caribbean island last Saturday that Soberana 02 had reached a 62 percent of effectiveness in the two-dose plan.

Such variable remains to be checked in the three-dose plan formula, last from which is Soberana PLUS, by FVI as well.

After learning results from Abdala, president of the Republic Díaz-Canel highlighted the achievement on his twitter account.

¨I think of (José) Martí, who wrote that ¨it is not the acquired and casual intelligence that brings honor to men; but the way they use it and save it. There is but one way to live on, that is to serve¨.

And it is that Abdala carries the name of a poem from Cuba´s National Hero, and it carries its image in the Revolution Square in Havana in the graphic label.

Cuban authorities have announced that in a couple of weeks, they hope to ask the Medical Devices and Drug Control State Center, the regulating authority, for the permission to use the emergency vaccines.