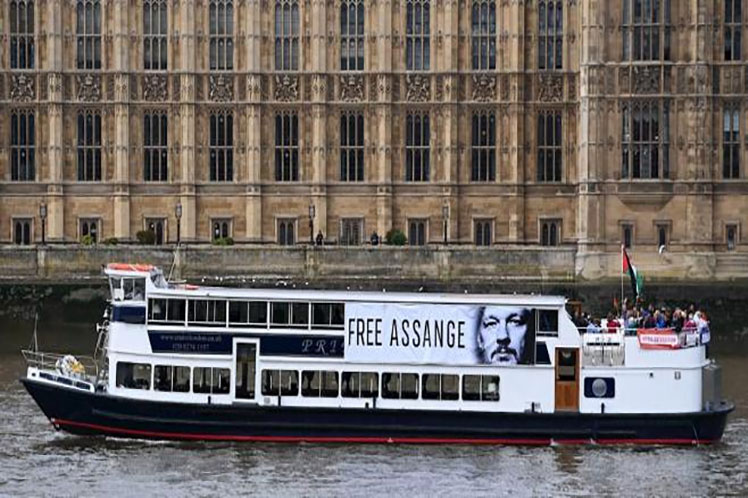 London, Jul 2 (Prensa Latina) Dozens of supporters of Julian Assange and his partner, Stella Moris, embarked on a Thursday boat trip on the Thames River in central London as part of a growing campaign of protests to demand the release from prison of the WikiLeaks founder. Video footage posted on social media showed the boat sailing from Festival Pier and briefly stopping outside the Houses of Parliament before continuing down the river to the US embassy in Vauxhall.
Share on facebook
Share on twitter
Share on whatsapp
Share on telegram
Share on email

Moris, who was accompanied by Gabriel, one of two sons she had by the Australian journalist while he was holed up in the Ecuadorean embassy in London, told reporters that Assange’s was a ‘political case’ as six months after a UK judge refused to extradite him to the United States, ‘he’s still sitting’ in Belmarsh prison.

Assange has been in jail since he was arrested at the Ecuadorian embassy in April 2019, and even though Judge Vanessa Baraitser objected to turning him over to US prosecutors for health reasons, she decided that Assange should wait behind bars for the result of an appeal filed by Washington.

The whistleblower is wanted by the US Justice Department on espionage and computer fraud charges, after WikiLeaks published hundreds of thousands of secret files and classified information that shed light on war crimes committed by US troops in Iraq and Afghanistan. He faces up to 175 years in solitary confinement inside a top security American prison if convicted in the US.

The accusations are based on the publication on WikiLeaks of thousands of secret files that uncovered war crimes committed by US troops in Iraq and Afghanistan, and compromising assessments made by State Department diplomats about foreign governments and political leaders, among others documents.

It is totally unfair and disproportionate, said Moris, who also confirmed that she is making arrangements for prison authorities to release Assange, even temporarily, to get married.