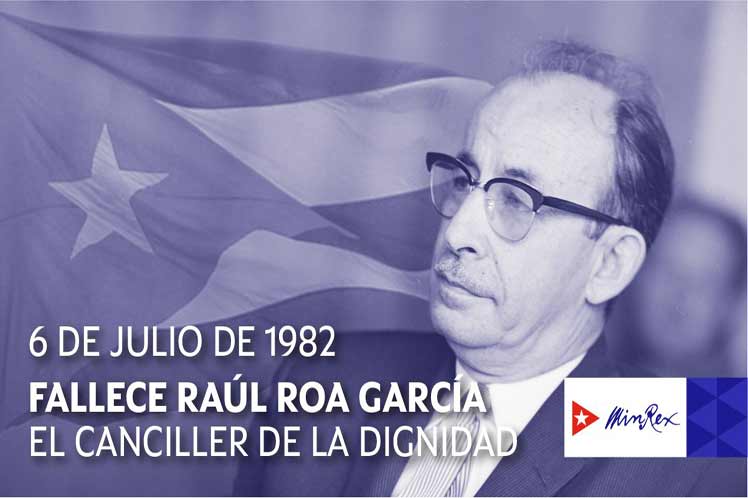 On his Twitter account, the minister noted that Roa Garcia brought the fiery verb of a revolutionary and the passion for a truly sovereign country to the international tribunes.

He added that Roa Garcia’s example guides Cuban diplomats, who honor the principles he defended. The ‘Minister of Dignity’ was born in Havana and at a very young age he joined the fight against Gerardo Machado’s tyranny, which led him to found, together with other colleagues, the University Student Directory in 1930.

Later, he separated from that organization due to ideological differences and created, with Gabriel Barcelo, Pablo de la Torriente and other revolutionaries, the Students’ Left Wing, with positions very close to the first Communist Party.

He was imprisoned and exiled, was a university professor, writer and after Fulgencio Batista’s coup in 1952, he joined those who opposed him, until he became involved in the Civic Resistance, closely related to the July 26 Movement.

After the triumph of the Cuban Revolution in 1959, Roa Garcia joined the transformations proposed by the new Government, until he was appointed head of the then Ministry of State on June 11 1959.

His defense of Cuba’s positions at international forums, as he did in the Organization of American States (OAS), where its member countries intended to accuse Cuba with interventionist purposes, earned him the nickname of Minister of Dignity.

After Cuba withdrew from the OAS, which Fidel Castro described as the Ministry of Yankee Colonies, in August 1960, Roa Garcia said: ‘I am leaving with the people, and the peoples of Latin America are leaving here with my people.’

Cuban President Miguel Diaz-Canel has said about Roa Garcia that he was a brilliant interpreter of the ideology of the Revolution, and highlighted his loyalty and brilliant courage when representing Cuba at international forums.