US policies against Cuba are doomed to fail, Commondreams says 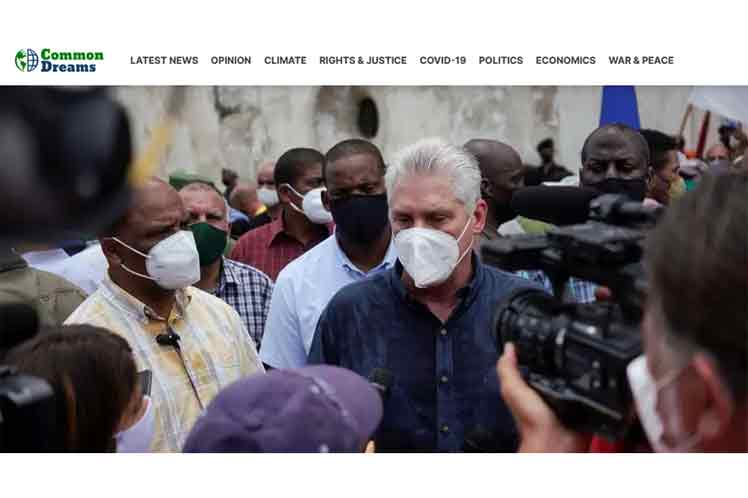 US policies against Cuba are doomed to fail, Commondreams says

Entitled The Hidden Hand of the US Blockade Sparks Cuba Protests, the article states that the brutal economic war against the island for more than 60 years explains the cause of recent events.

In 1960, then Deputy Secretary of State Lester Mallory explicitly called for ‘denying money and supplies to Cuba, to lower monetary and real wages, to cause hunger, despair and the overthrow of the government’, recalls the article, signed by Medea Benjamin, co-founder of pacifist organization Code Pink, and Leonardo Flores, an expert on Latin American politics.

It argues that the unrest was exaggerated by the Western press and Cuban Americans who have been predicting the imminent fall of Cuban government for 60 years.

Media outlets like The New York Times wrote about ‘hundreds of Cubans’ while Reuters described them as thousands. In either case, Cuba has a population of 11 million people, it adds.

The protests pale in comparison, both in terms of turnout and in state repression, to mass mobilizations that have rocked Colombia, Haiti, Chile, Ecuador and other Latin American countries over the past few years—or even Portland, Oregon, or Ferguson, Missouri, US, it points out.

Moreover, U.S. media have paid little attention to the counter protesters, who have gone out into the streets to express their support for the government and Cuban Revolution, it highlights.

This includes Cuban President Miguel Díaz-Canel, who marched in the streets of Havana after denouncing the protests as an attempt to ‘fracture the unity of the people,’ the article emphasizes.

Benjamin and Flores praised that Cuba saves its people from a suffocation scenario, in particular health policies to protect the population from the worst of the Covid-19 pandemic.

Cuba,they highlighted, has already shown that two of the five vaccines against Covid-19 are successful in preventing infections by the coronavirus that causes the disease and has immunized more than two million people with their vaccines produced locally.

For both columnists, it was not overlooked the fact that the United States’ economic war against Cuba was always accompanied by other strategies to overthrow the government on the island.

These include, they emphasized, assassination attempts, support for terrorists (such as Luis Posada Carriles, who blew up a Cuban plane in 1976, killing 73 people), an invasion attempt, and millions of dollars spent on ‘soft’ power.