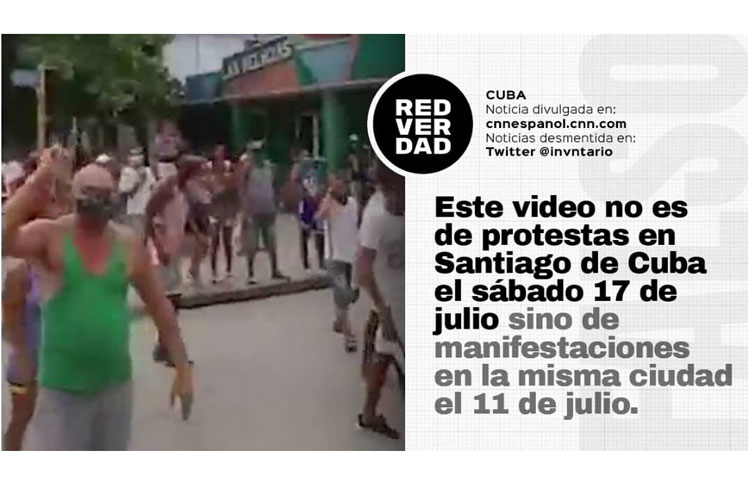 The foreign minister referred in his Twitter account to the case of CNN in Spanish, which broadcast a video with supposedly protesters against the island’s government in the city of Santiago de Cuba, on July 17, when the images actually corresponded to July 11.

The use of these resources out of context, ‘to convey instability in our country, violates the most elementary principles of journalism and turns them into a tool of the hate and disinformation campaign’, the head of Cuban diplomacy emphasized.

Rodríguez, during a press conference last week, pointed out the communication political operation being carried out against the Caribbean nation, counting on financing from the United States, participation of companies based there and the use of sophisticated technologies.

Cuban media have also proved wrong information that circulates on social networks and is reproduced by communication organizations, as well as the manipulation of images and videos.

Such is the case of American news network Fox News, which issued a report blurring the images of posters of supporters of the island’s government, to make them pass as opposition groups.

Something alike happened with a video showing the murder of a young man, whom they presented as Cuban, and which according to clarification by EFE agency corresponds to 2015 in Puerto Rico.

Spanish researcher Julián Macías echoed the complaint of Cuban Betty Pairol, about using her image as if it were a protester against the Cuban government.

What is interesting, Macías points out, is that this woman made her complaint on Twitter, and instead of the company censoring those who misused the photograph, it penalized her for ‘unusual activity.’

The micro blogging company is pointed out from Cuba as an accomplice in operations against it, according to the island’ s foreign minister, since it did not apply its security policies to those who promoted the #SOSCuba campaign, despite showing information intoxicating behavior.

Recently, in addition, in that social network they used as evidence of the arrival of Mexican troops to the Caribbean nation, the photo of Mexican Air Force plane that brought back health professionals who served in that country.

Images from Spain, Egypt and Argentina were used to depict the supposed mass protests in Cuba, while deaths of children and young people in Colombia and Venezuela were also manipulated.